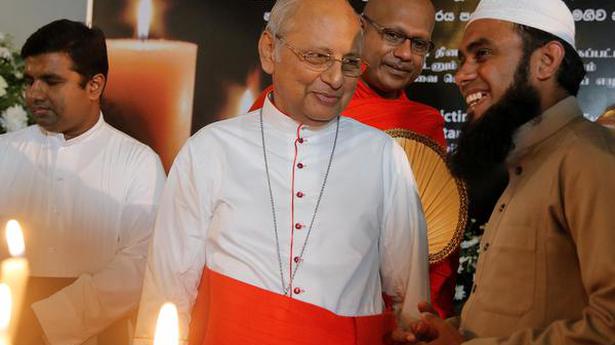 President Maithripala Sirisena on Monday appointed a former Army commander to the post of Defence Secretary, and named a new police chief, as part of his promised effort to overhaul Sri Lanka’s security establishment in the wake of the Easter blasts that killed over 250 people.

General S.H.S Kottegoda was appointed the Secretary of Defence, after Hemasiri Fernando resigned from the post. While taking responsibility of for the attacks, Mr. Fernando had said, “there was no failure” on his part.

President Sirisena also named Deputy Inspector-General Chandana Wickramaratne as the acting police chief. The incumbent Pujith Jayasundara, who Mr. Sirisena had earlier asked to resign, was on Monday asked to go on “compulsory leave” after he “refused to resign”, official sources said.

As per Sri Lankan law, the Inspector General of Police (IGP) can be removed from the post only with a parliamentary resolution backed by a majority and based on a subsequent inquiry by a committee.

President Sirisena, who addressed media heads last week, squarely blamed the Defence Secretary and the IGP for “failing” to pass on the information to him.

As Sri Lanka tries to come to terms with the serial bombings on April 21, serious questions on the apparent lapse on intelligence sharing loom.

The country’s security forces and agencies have come under the spotlight, especially after President Sirisena and Prime Minister Ranil Wickremesinghe said they were not aware of the prior warnings of likely attacks that, both leaders said, officials knew about.

On April 4, India is said to have shared highly descriptive information on the threat with Sri Lankan authorities.

Meanwhile, security forces are continuing their search for the remaining suspects and possible cache of weapons or explosives.

Prime Minister Wickremesinghe said on Sunday that most suspects have either been “killed or arrested”. Over 100 suspects have been arrested so far. All suspects listed in a “wanted list” publicised by the police recently have been identified, local media reported on Monday. Two of them were believed to have been killed in Friday’s overnight gun battle or the subsequent explosion early Saturday, following which security forces found 15 bodies in the eastern Ampara district.

On Monday evening, the Army Headquarters announced that all Army, Navy, Air Force and police areas within the Western Province, where Colombo is located, and Puttalam District in the North Western Province were being placed under a newly-formed ‘Overall Operational’ command.

Rep. Elijah Cummings to lie in state at US Capitol ceremony

The late Maryland Rep. Elijah Cummings will be remembered by congressional leaders and colleagues as he lies in state at the Capitol. Cummings, a Democrat and chairman of the House Oversight and Reform Committee, died Oct. 17 after complications from long-standing health problems. A wake and funeral are planned Friday in Baltimore. In this Tuesday, […]

A parliamentary panel in Sri Lanka has accused President Maithripala Sirisena of “actively undermining” government and security systems, leading to serious lapses ahead of the Easter terror attacks. In a report tabled in the House on Wednesday, the panel noted that the President “failed in numerous occasions to give leadership and also actively undermined government […]