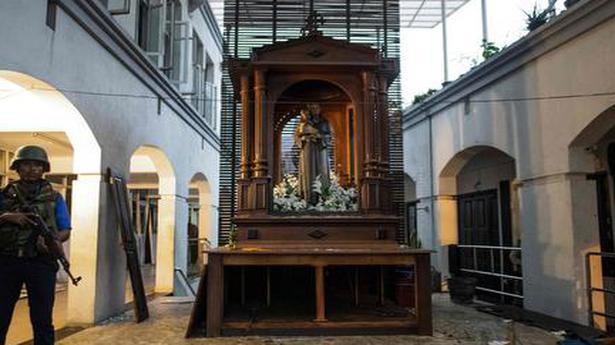 Sri Lankan police are trying to track down 140 people believed to be linked to the Islamic State, which claimed responsibility for the Easter Sunday suicide bombings that killed 253, as shooting erupted in the east during a raid.

Muslims in Sri Lanka were urged to pray at home after the State Intelligence Services warned of possible car bomb attacks, amid fears of retaliatory violence.

And the U.S. Embassy in Sri Lanka urged its citizens to avoid places of worship over the weekend after authorities reported there could be more attacks targeting religious centres.

Archbishop of Colombo Cardinal Malcolm Ranjith told reporters he had seen a leaked internal security document warning of further attacks on churches and there would be no Catholic masses this Sunday anywhere on the island.

The streets of Colombo were deserted on Friday evening, with many people leaving offices early amid tight security.

President Maithripala Sirisena told reporters some Sri Lankan youths had been involved with the Islamic State since 2013. He said information uncovered so far suggested there were 140 people in Sri Lanka involved in the Islamic State activities. “Police are looking to arrest them,” he said. Nearly 10,000 soldiers were deployed across the country to carry out searches and provide security for religious centres, the military said.

The All Ceylon Jamiyathul Ullama, Sri Lanka’s main Islamic religious body, urged Muslims to conduct prayers at home in case “there is a need to protect family and properties”.

Illustrating the tension that has gripped the country, shooting erupted between security forces and a group of men in the east during a search and cordon operation, a military spokesman said. The raid took place in the town of Ampara Sainthamaruthu. The spokesman said there was an explosion in the area and when soldiers went to investigate they were fired upon.

The police have detained at least 76 people, including foreigners from Syria and Egypt, in their investigations so far. The government said nine homegrown, well-educated suicide bombers carried out the attacks, eight of whom had been identified. One was a woman.

Authorities have so far focused their investigations on international links to two domestic Islamist groups — National Thawheed Jama’ut and Jammiyathul Millathu Ibrahim — they believe carried out the attacks.

Government officials have acknowledged a major lapse in not widely sharing an intelligence warning from India before the attacks.

The plight of Japan’s social recluses

Two recent cases of gruesome stabbings have shone a new spotlight on Japan’s ‘hikikomori’, a group of extreme recluses who have chosen to end all social contact, often refusing to leave their homes for years on end. Numbering upwards of a million, ‘hikikomori’ were thought, until recently, to be predominantly young men, in the 15-40 […]

Spain’s Queen in Mozambique, heatwave grips Delhi, and other news in pictures

6:30 pm Spain’s Queen in Mozambique Queen Letizia Ortiz Rocasolano of Spain is in Mozambique for a two-day visit to meet the victims in the recent natural disasters in the country. This is Queen Letizia’s fourth cooperation trip after visiting Honduras and El Salvador, Senegal and Dominican republic and Haiti. 4.45 pm Heatwave grips Capital […]