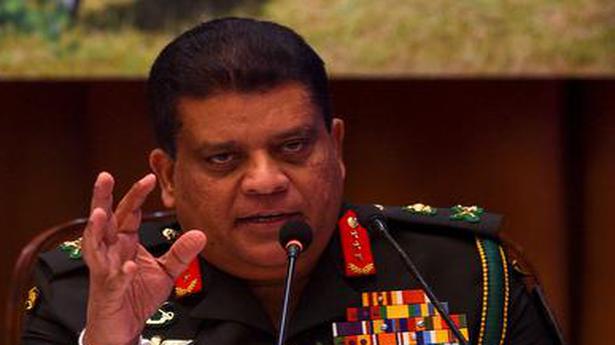 The advertisement, which appeared in a newspaper last weekend, had comments made by Lt. Gen. Shavendra Silva, the current Army chief, in 2009 praising presidential candidate Gotabaya Rajapaksa for his role in ending the country’s long civil war.

Mr. Gotabaya Rajapaksa was Defence Secretary at the time, serving under his brother, then-President Mahinda Rajapaksa, and Lt. Gen. Silva was an Army division commander. The advertisement includes a photo of Lt. Gen. Silva in uniform with his comments.

Mr. Deshapriya criticised the advertisement and said he has sought an explanation from the Secretary to the Defence Ministry on why the Army chief was being used to promote a presidential candidate.

“We highly regret this advertisement,” said Mr. Deshapriya, adding that “it could be an old statement, but it is regrettable that the rank and designation of the present army commander had been used”.

Mr. Mahinda Rajapaksa has swept to victory in several elections by promoting himself as the leader who defeated the once invincible Tamil Tiger rebels in the long civil war.

Mr. Gotabaya Rajapaksa’s popularity is on the increase after April’s Easter attacks in Sri Lanka that killed 263 people and wounded 500. But to his opponents and critics, he is a feared defence official accused of condoning rape, torture and shadowy disappearances of critics.

On October 15, he said that if he wins the November 16 election, he won’t recognise an agreement the government made with the U.N. human rights council to investigate alleged war crimes during the civil war. If he does win and follows through with his comments, it would be a severe setback to Sri Lanka’s post-war reconciliation process.

Hong Kong’s government reiterated that violence is not the solution after an unapproved march descended into chaos with police firing tear gas and water cannons after demonstrators lobbed Molotov cocktails at government buildings, blocked traffic and set fires. The government in a statement late Sunday said violence would only harm the community and it was […]

More nations were flying medical staff and supplies to Samoa on Friday to battle a measles outbreak that prompted the Pacific island nation to declare a state of emergency this month, as the death toll rose to 42, most of them children younger than four. A significant drop in immunisation over the last few years […]

Mike Bloomberg is out of the Democratic presidential race, but he’s not done trying to beat President Donald Trump. The billionaire businessman is funding an anti-Trump operation in six battleground states in an effort to oust the Republican president in November. Bloomberg will dip into his vast fortune to pay for field offices in Arizona, […]