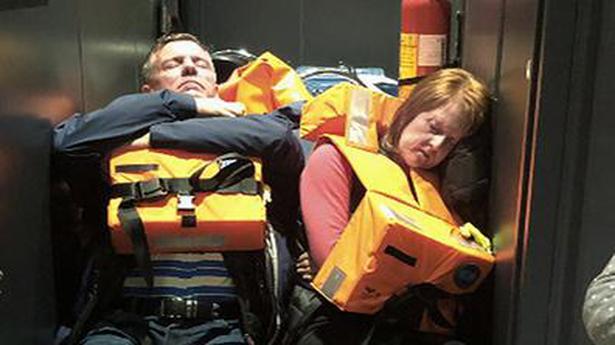 A cruise liner that ran into trouble in stormy seas off Norway reached port under its own steam on Sunday after hundreds of passengers were winched to safety by helicopter in a spectacular rescue operation, TV images showed. Escorted by tugboats, the Viking Sky arrived at the port of Molde at around 4.15 p.m.. Nearly a third of its 1,373 passengers and crew had already been airlifted off the ship after it lost power along a stretch of Norwegian coastline notorious for shipwrecks.

The ship lost power and started drifting on Saturday afternoon in perilous waters two km off More og Romsdal, prompting the captain to send out a distress call.

The authorities launched an airlift in difficult conditions rather than run the risk of leaving people on board. Some 460 of the 1,373 people on board had been taken off by five helicopters before the airlift was halted to allow towing to begin.

Police said 17 people had been taken to hospital.

With three of four engines restarted on Sunday, two tugs towed the vessel away from dangerous reefs.

The Viking Sky was heading for the port of Molde, and expected to arrive during the afternoon. The city lies some 500 km northwest of Oslo, officials said. “The boat is sailing with its own engines with tugs fore and aft,” rescue coordinator Jan Morten Dale told a press conference. “That shows that things are relatively under control on board.”

Dramatic footage of the passengers’ ordeal showed furniture and plants sliding round the lurching vessel as parts of the ceiling came down. Dozens of passengers wearing life jackets were seen seated waiting to get off the vessel. “I have never seen anything so frightening,” said Janet Jacob, who was rescued. “I started to pray. I prayed for the safety of everyone on board,” she told the NRK television channel.

“We were sitting down for breakfast when things started to shake… It was just chaos,” said another passenger, American John Curry, as quoted in Norwegian by local media.

The Viking Sky sent out a distress signal due to “engine problems in bad weather”, the rescue centre tweeted earlier. The ship was sailing south from Tromso to Stavanger when engine trouble struck in an area that has claimed many vessels. Operated by the Norwegian firm Viking Ocean Cruises, the Viking Sky was launched in 2017 with a capacity of 930 passengers plus crew. In addition to U.S. and British nationals, there were also passengers from 14 other countries on board.

Taliban says it will punish kidnappers of Afghan Sikh, denies role in abduction

Nedan Singh was kidnapped in Chamkani district of Paktia province in Afghanistan on June 22 in the second such incident in recent months Source: thehindu.com Related

Nearly one in three adults in Hong Kong reported symptoms of post-traumatic stress disorder (PTSD) during months of often violent social unrest in the city, according to a study published in The Lancet medical journal Friday. Around one in 10 had symptoms of probable depression, figures comparable to those seen in areas of armed conflict […]

U.S. to use ‘mechanised forces’ in Syria

The U.S. will strengthen its military presence in Syria with “mechanised forces” to prevent Islamic State fighters seizing oil fields and revenue, the U.S. Defense Secretary said on Friday, the latest twist in President Donald Trump’s confusing policy on Syria. Mr. Trump has been softening his pullout plans for Syria after a backlash from Congress, […]