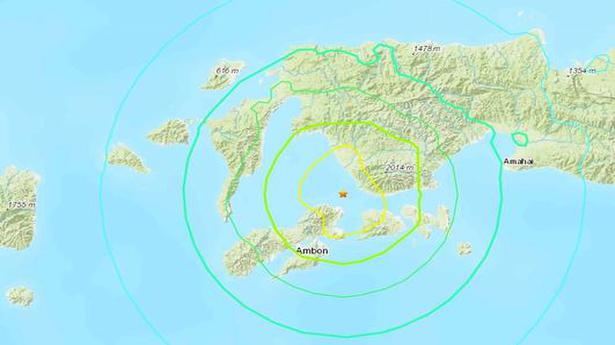 A strong 6.5-magnitude earthquake hit off the remote Maluku islands in eastern Indonesia on Thursday, U.S. seismologists said, but no tsunami warning was issued.

The quake struck about 37 kilometres offshore northeast of Ambon in Maluku province at 8:46 am local time, at a depth of 29 kilometres, according to the U.S. Geological Survey.

There were no immediate reports of casualties or major damage in the area, which has been rocked by strong quakes in the past.

“I was asleep with my family when suddenly the house started to shake,” said an AFP reporter in Ambon.

“The quake was really strong. We ran from our house and saw the neighbours fleeing too. Everybody was panicking.”

Indonesia experiences frequent seismic and volcanic activity due to its position on the Pacific ‘Ring of Fire’, where tectonic plates collide.

Last year, a 7.5-magnitude quake and a subsequent tsunami in Palu on Sulawesi island left more than 4,300 people dead or missing.

On December 26, 2004, a devastating 9.1-magnitude earthquake struck off the coast of Sumatra and triggered a tsunami that killed 220,000 throughout the region, including around 170,000 in Indonesia.

Taliban orders halt to attacks in Afghanistan ahead of U.S. agreement

The UK government has asked the Queen to suspend Parliament in second week of September, just days after MPs return to work after the summer recess. Members of Parliament are due to return on September 3, and the government’s move means they will only have around a week to pass any legislation to prevent a […]

Joe Biden and Kamala Harris held meetings with a group of experts on the public health and economic crises the country is facing. Confident of their victory in the US presidential election, Democratic candidate Joe Biden and his running mate Senator Kamala Harris have begun working on the task ahead by focusing on two critical […]