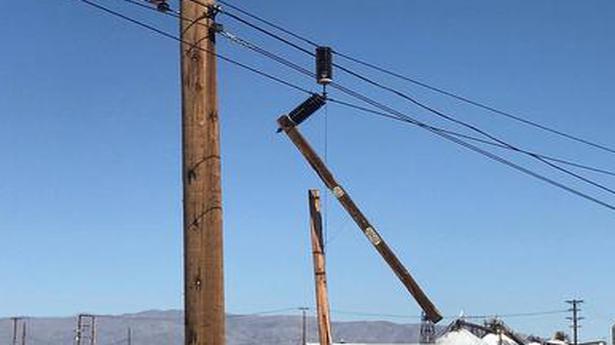 A strong aftershock shook Southern California early on Friday as residents were still assessing the damage from the strongest earthquake in the region in 25 years on July 4, which was felt by more than 20 million people.

The 5.4 magnitude aftershock, the biggest so far, struck the same desert region as Thursday’s earthquake. Its epicenter was about 18 kmwest of Searles Valley at 4:07 a.m., the U.S. Geological Survey said.

The aftershock was felt in Los Angeles, about 240 km to the south, and the surrounding area, with many residents posting on Twitter that they were awakened by it.

By midday local time on Friday, the USGS had registered more than 200 smaller aftershocks following Thursday’s 6.4 magnitude quake near the city of Ridgecrest, which was felt from Los Angeles to Las Vegas. Seismologists said they were expecting more in the next few days.

California’s new ShakeAlert system detected Thursday’s quake, but did not alert residents who had subscribed to the cell phone app because the shaking in Los Angeles County was below the threshold for a warning.

That did not stop some residents from complaining that they should have been warned anyway.

“We hear you and will lower the alert threshold,” the city of Los Angeles said in a message on Twitter on Thursday, adding that it would make that change in conjunction with the USGS, which developed the alert system.

Only a few injuries were reported in Thursday’s quake, but two houses caught fire from broken gas pipes, officials said.

Water gushed from zigzagged cracks in the pavement from busted water lines. Deep fissures snaked across the Mojave Desert, with passersby stopping to take selfies while standing in the rendered earth.

The quake sent 30 residents of the desert community of 28,000 to emergency shelters, knocked some houses off their foundations and left many homeowners wondering if their insurance would cover the damage, Ridgecrest Mayor Peggy Breeden said.

“The most important thing is that we have not had any loss of life or any major personal damage to people,” Breeden told CNN on Friday.

Breeden said officials were still assessing the extent of the damage, but added that emergency state and federal aid would enable the city’s overwhelmed agencies to start the cleanup without worrying about their budgets.

The quake hit the edge of Death Valley National Park about 113 miles northeast of Los Angeles at about 10:30 a.m. on Thursday. It was very shallow, only 10.7 km deep, amplifying its effect, and was felt in an area inhabited by 20 million people, the European quake agency EMSC said.

The Ridgecrest Regional Hospital, where 15 patients were evacuated earlier, appeared intact apart from some new cracks in the walls.

The quake is the largest in Southern California since the 1994 magnitude 6.6 Northridge earthquake, USGS geophysicist Paul Caruso said. That quake, which was centered in a heavily populated area of Los Angeles, killed 57 people and caused billions of dollars of damage.

Pak. officials in soup for selfie with COVID-19 patient

Pakistan has suspended six civil servants after they posed for a selfie with a COVID-19 patient in a quarantine centre, an official said Tuesday. The selfie — widely shared on social media — pictured a group of men around the apparent patient, several of them smiling broadly and none wearing face masks. The picture was […]