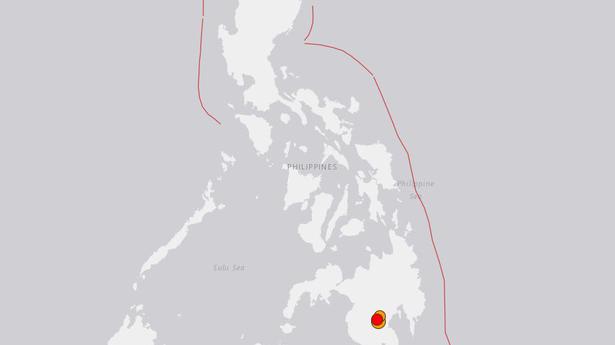 A powerful earthquake shook the southern Philippines on Tuesday morning, knocking out power in some areas, sending people out of homes and buildings and forcing classes to be suspended in one city to allow inspections of school buildings.

There was no immediate reports of major damage or injuries from the quake, which the Philippine Institute of Seismology and Volcanology said had an initial magnitude of 6.6 and was caused by movement in a local fault about 7 kilometers (4.3 miles) deep about 25 kilometers northeast of Tulunan town in Cotabato province. The U.S. Geological Survey reported that the earthquake had a magnitude at 6.8.

A 6.3 earthquake earlier this month in the same region killed five people and caused damage to several schools and other buildings.

Seismic activity is common in the Philippines, which lies on the Pacific “Ring of Fire,” the ring of faults around the Pacific Ocean where most of the world’s earthquakes occur.

A gunman killed three people and wounded nine on a streetcar in the Dutch city of Utrecht on Monday morning in what the Mayor said appeared to be a terror attack, touching off a manhunt. Authorities immediately raised the terror alert for the area to the highest level. Security at airports and key buildings were […]

After months of sometimes-violent unrest in Hong Kong, an election with record turnout handed a big victory to pro-democracy local district council candidates, posing a new conundrum for Beijing and adding pressure on the city’s leader. In the run-up to the citywide elections on Sunday, extreme clashes had broken out between riot police and anti-government […]

Pak rules out possibility of India-Afghan trade through Wagah border

Pakistan will not allow Afghanistan to import goods from India via the Wagah border, saying that the transit trade was a bilateral and not a trilateral issue, according to a media report. Pakistan Prime Minister’s Adviser to Commerce Abdul Razak Dawood said this during a press conference on Wednesday. “We have asked Afghanistan for not […]