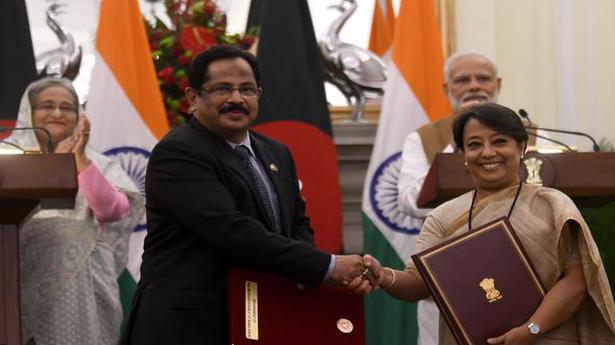 As Bangladesh Prime Minister Sheikh Hasina returns to Dhaka and is set to address a press conference on Wednesday following her Delhi trip, she may have to confront uncomfortable questions related to a murder.

A student of the country’s elite technical institute Bangladesh University of Engineering and Technology [BUET] was allegedly murdered last weekend soon after he raised questions about the country’s recent bilateral agreements with India. The second-year student Abrar Fahad was allegedly lynched to death following “an interrogation” by student leaders of Bangladesh Chhatra League (BCL), the students’ wing of ruling Awami League. At least four persons have been detained following the incident.

In a social media post, Fahad asked “why should we give 1.5 lakh cumec of water [of Feni river]” to India without “any return.” An MoU between India and Bangladesh was signed on “withdrawal of 1.82 cusec of water from Feni river by India for drinking water supply, scheme for Sabroom town, Tripura.” Fahad also questioned Dhaka’s plan to export petroleum gas to India.

A Dhaka-based journalist told The Hindu that Ms. Hasina’s trip is “interpreted in Bangladesh as one when she gave away everything and got nothing.” Mr. Fahad’s posts, which went viral, and alleged murder contributed to the sentiment, the journalist said. Mr. Fahad’s friends said that following the posts he was “interrogated” by BCL leaders of BUET.

“They asked him if he is associated with Islami Chhatra Shibir [students wing of Jamat-e-Islami] as he was posting anti-India and anti-Awami League messages. He was isolated in a university room and reportedly beaten to death,” his friend told The Hindu on condition of anonymity. The autopsy report confirmed, Fahad was beaten to death by blunt objects.

Following the incident, students staged demonstrations in various universities. Usually the Prime Minister addresses the press after major overseas trips; thus Ms. Hasina is expected to interact with press on Wednesday. She may have to give the government’s version about the student’s death. Government officials agree that the issue is “snowballing” and it would “be better if it is addressed fast.”

Boeing 737 MAX 8 jets grounded right, left and centre. But not in US

A plane crash that killed 157 people in Ethiopia on Sunday has triggered groundings of Boeing 737 MAX 8 planes across the globe, but the aerospace giant’s home — the United States — still allows the jets to fly. India joined the wave of suspensions on Tuesday by saying passenger safety was its top priority. […]

The Israeli Military said it intercepted four incoming rockets from Syria on Tuesday and explosions were heard shortly after that in Damascus, a week after another Israeli strike targeted a top Palestinian militant in the Syrian capital. Israeli air defense systems captured the projectiles, the military said, and no harm was caused to Israeli communities […]

U.S. to pull all remaining diplomatic staff from Venezuela

The United States will withdraw all remaining diplomatic personnel from its embassy in Caracas as the crisis in Venezuela deepens, Secretary of State Mike Pompeo has said. The move worsens already tattered relations, with President Donald Trump having said he rules out no options including military intervention to oust President Nicolas Maduro, even as Washington […]