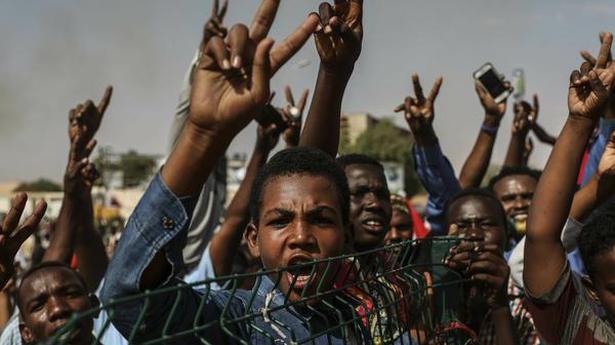 The organisers of the protests that drove Sudan’s President Omar al-Bashir from power said they had met on Saturday with the ruling military council for talks on forming a transitional government.

The protesters had agreed to resume talks with the military on Wednesday, after a temporary break. The announcement to set up a joint committee to tackle political disputes was followed by the resignation of three members of the military council, whom the opposition had accused of being too close to Mr. al-Bashir.

The protesters fear the Army, dominated by Mr. al-Bashir appointees, will cling to power or select one of its own to succeed him. They also fear Islamists and other factions close to the deposed leader, who is now jailed in the capital, Khartoum, will be granted a role in the transition.

The Sudanese Professionals Association, which spearheaded four months of escalating demonstrations that led the military to remove Mr. al-Bashir from power April 11, is demanding a civilian government. They have proposed that a sovereign council, which would include “limited” Army representation, hand over full powers to civilians during a four-year transitional period.

Army leaders have called for a two-year transition during which the generals would retain sovereign power and give only executive authorities to civilians.

The military also agreed on Wednesday to recognise the Forces for the Declaration of Freedom and Change, a coalition of opposition groups led by the SPA, as the uprising’s only legitimate representative, in a move widely seen as a victory for the protesters.

The council has met with a wide range of political parties about the transition, including those formerly close to Mr. al-Bashir. Shams al-Deen al-Kabashi, the spokesman for the council, said late on April 26 that it had completed a review of proposals. He did not elaborate further.

The opposition has meanwhile vowed to continue protests, centered on a sit-in outside the military headquarters in Khartoum.

The Umma party of former Prime Minister Sadiq al-Mahdi, a leading opposition figure, said the protesters will not break up the sit-in until a full transfer of power to civilians.

The SPA says around 100 people were killed by security forces since December, when a failing economy and a spike in the prices sparked protests.

The road to uncertainty

After a long delay and political disagreements, the Independent Election Commission (IEC) of Afghanistan finally announced last week the preliminary results of the Presidential election, held in September. But the results are unlikely to resolve the political crisis the war-torn country is undergoing. The election that saw a record low turnout — only a quarter […]

China on Monday condemned U.S. Secretary of State Mike Pompeo for branding COVID-19 as the “Wuhan virus”, terming his remarks as “despicable behaviour” and an attempt to stigmatise the Communist nation. The World Health Organization (WHO) has officially named the novel coronavirus as COVID-19, Chinese Foreign Ministry spokesman Geng Shuang told a media briefing here […]

As voting ended on Saturday, the rival political camps of Goatabaya Rajapaksa and Sajith Premadasa in Sri Lanka’s presidential election appeared confident that the high turnout would push their candidate past the required 50% mark. A second round of counting will be undertaken to tally preference votes if neither contestant secures over half the vote […]