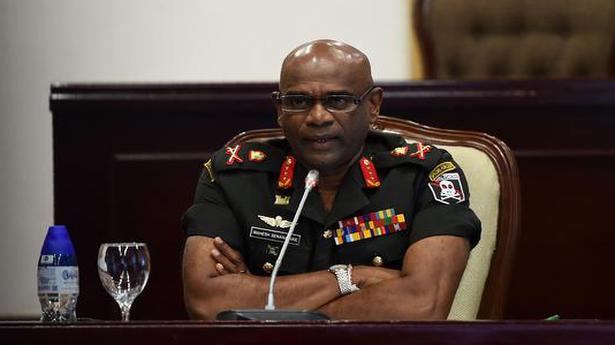 Sri Lanka Army’s chief has said some of the suicide bombers who carried out the country’s worst terror attack on Easter Sunday last month had visited Kashmir and Kerala for “some sorts of training” or to “make some more links” with other foreign outfits.

It is the first time a top security official has confirmed the militants’ visit to India, which had shared intelligence inputs with Sri Lanka ahead of the attacks.

Nine suicide bombers, including a woman, carried out a series of blasts that tore through three churches and three luxury hotels on April 21, killing 253 people and injuring over 500.

In an interview to the BBC on Thursday, Lieutenant General Mahesh Senanayake disclosed some details on the movement of the suspects in the region, and also international links. “They have gone to India, they’ve gone to Kashmir, Bangalore (Bengaluru); they’ve travelled to Kerala State. Those are the information available with us,” he said.

Asked what activities the attackers undertook in Kashmir and Kerala, the Army chief said: “Not exactly, but definitely in some sorts of training or to make some more links towards the other organisations outside the country.”

The terror outfit Islamic State claimed responsibility for the attacks, but the government blamed the local extremist group National Thowheeth Jamaath (NTJ). Colombo has since banned the NTJ and arrested over 100 people for the blasts.

On the possible involvement of a foreign group, the Army chief said that by looking at the pattern of the operation and the places where the suspects had visited, there had to be some outside involvement of some leadership.

Asked why the threats were not taken more seriously after information was received from India, he said: “We had some information and intelligence-sharing; situations and military intelligence on a different direction and the others were different and there was a gap that everybody could see today.”

He said as the Chief of the Army, he believed that everybody who is responsible for intelligence-gathering and the national security is to be blamed, including the political hierarchy.

Asked why Sri Lanka was targeted, Lt. Gen. Senanayake said: “Too much of freedom, too much of peace for the last 10 years. People forget what happened for 30 years. People are enjoying peace and they neglected security”. He was referring to the three-decade civil war with the Liberation Tigers of Tamil Eelam.

“We are deployed on the ground to give confidence to the public and ensure there is no violence or escalation of communal riots in this country. Have trust on the armed forces and the police who will bring normalcy as soon as possible,” the Army Chief added.

Thirty-seven civilians were killed and more than 60 wounded when gunmen ambushed a convoy transporting workers of Canadian gold miner Semafo in eastern Burkina Faso, regional authorities said on November 6. The attack is the deadliest in recent years as the military struggles to contain Islamist violence that has overrun parts of Burkina Faso, located […]

IAG said it had reduced passenger capacity for April and May by 94% compared with the same period last year Source: thehindu.com Related

Swedish teenager Greta Thunberg’s shaming of world leaders and air travelers over climate change has won her millions of admirers and attracted many new followers to her cause. But it just might cost her the Nobel Peace Prize. Greta Thunberg, one of few people whose nomination has become known before the awards ceremony, is the […]