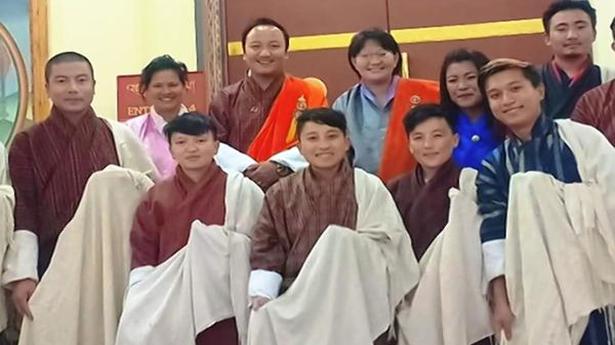 “When I was a teenager, my uncles tried to teach me to walk like a man, my classmates would call me chhakka (slur word for gay),” says Tashi Tsheten, a 26-year old lab technician who leads one of Bhutan’s most prominent LGBTIQ groups, Rainbow Bhutan. The Himalayan Kingdom has never punished homosexuality, he explains, but most in their religiously conservative society would rather not talk about it. As a result, while Bhutan has had two Sections (213 and 214) in its Penal Code that ordered imprisonment for “unnatural sex” for decades, no one was ever actually prosecuted under the law. Instead, Mr. Tsheten and other activists in the gay rights movement say they faced bullying and heckling from classmates, and the odd family elder trying to make them more “manly”.

This month, with Bhutan’s new government initiating the process to repeal the two Sections, Mr. Tsheten says he hopes even that sort of harassment will come to an end. On June 7, Parliament’s lower house, the National Assembly, passed a Bill to repeal section 213 (and consequently 214). The Bill is expected to be taken up by the upper house, the National Council, in six months. Once it passes, the Act will be presented to the 39-year-old King, Jigme Khesar Namgyel Wangchuck, for approval.

“This was an arcane law and has never been implemented in Bhutan and so we felt that the time had come to dispense with it,” says Tashi Wangyal, a member of the National Council. “In Bhutan, we may be religiously conservative, but we are socially liberal, as can be seen from our attitudes and open acceptance when it comes to divorce or children born out of wedlock, or rehabilitation of prisoners.”

Bhutan also has fairly progressive laws on gender equality. Women form a large part of the workforce, and in 2018 elections, seven of the 10 women contestants won. At clubs in downtown Thimphu that can stay open till 5 a.m., the openness of Bhutanese society is plain to see: girls and boys mix freely, women’s safety is not a concern, and alcoholism and drugs, not sexual freedoms, are bigger issues for the youth.

Bhutanese pride themselves on prioritising “Gross National Happiness” over GDP wealth, and approve of the country’s freedoms and tolerant values, which they say flow from the Buddhism practised by a majority in the country.

But the leap from gender equality to equality for transgenders and homosexuals will take longer, say activists. One of the reasons is the culture of “strong manhood” which pervades Bhutanese society and is expressed through the prominence of phallic symbols everywhere: on doors, public walls and carpets and rugs inside homes. Traditional attire is also enforced in offices and schools, which means men must wear the shorter wraparound tunic-like koh, while women wear long skirts or kiras.

According to Mr. Tsheten, refusing to fit in with those cultural mores is hard in a small society. “Sex is not a taboo, but being less manly definitely is, and everyone has an opinion about you,” he says. His partner Pema, 27, who has lobbied for the legal amendments, faced more direct bullying, being roughed up in toilets and threatened with violence.

Another issue was the lack of spaces for LGBTIQ people to meet. Mr. Tsheten says the community was eventually built because of government and international funding in HIV/AIDS prevention activities that drew in the more vulnerable homosexuals for testing. In 2009, the Bhutan Network for HIV Positive People was started, and a civil society organisation called Lhak-Sam was registered in 2010.

At the time, Mr. Tsheten remembers, Bhutanese officials would state at international conferences that the country had no homosexuals at all. In 2015, an activist Passang Dorji “came out” for the first time on national television, which was considered a watershed moment. Soon, groups like Rainbow Bhutan and LGBT Bhutan started up.

Significantly, Mr. Tsheten says he himself never actually came out, as he felt it was unnecessary to go public on what he considers a private issue. He lives with his partner at home along with his parents, but says they follow a strict “don’t ask, don’t tell” policy. It’s a policy that appears to suit all.

(Suhasini Haidar works with The Hindu.)

Pak delegation in Paris to present compliance report before FATF

Facing the risk of being placed on the FATF black list with Iran and North Korea, a delegation led by Pakistan’s economic affairs minister will present its case before the financial watchdog on the measures taken by Islamabad to curb terror financing and money laundering. Pakistan was placed on the grey list by the Paris-based […]

Hundreds of Taliban fighters stormed a district in Afghanistan’s western Badghis province, with both Afghan government forces and the insurgent group suffering dozens of casualties, provincial officials said. The district of Bala Murghab has been a recurring hotspot of fighting in the past two months, and officials have previously warned that it could fall to […]

The Taliban have killed at least 23 Afghan troops and nine civilians, officials said on Monday, as a fresh wave of violence grips Afghanistan despite a deal with the U.S. and a worsening coronavirus crisis. Under the terms of the U.S.-Taliban deal, the Afghan government and the insurgents were by now supposed to have concluded […]