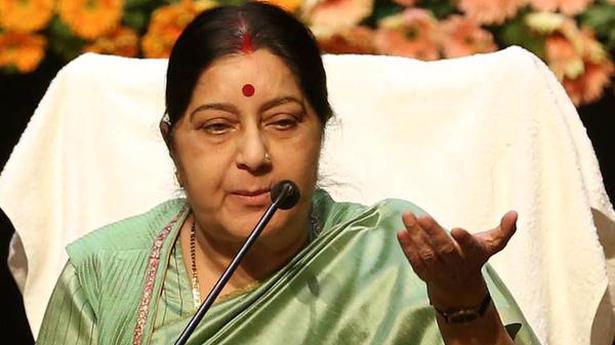 An online statement by External Affairs Minister Sushma Swaraj seeking a report from Indian officials in Islamabad about an apparent abduction of two sisters from minority Hindu community in Pakistan turned into spat after Islamabad’s information minister retorted strongly to her comment.

In a social media message on Sunday regarding the incident in Pakistan, Ms Swaraj said, “I have asked the Indian High Commissioner in Pakistan to send a report on this.” This drew a quick response from Pakistan information minister Chaudhary Fawwad Hussain who said that it is an internal issue of his country.

The incident was first was splashed in the social media of Pakistan which showed a grieving father protesting in a police station at Dharki town of Ghotki district in Sindh asking for the release of his two daughters taken away by goons during the Holi festival.

According to available reports two sisters Raveena (13) and Rina (15) were abducted and forced to undergo religious conversion. Pakistan Hindu Sewa Welfare Trust alleged that police initially refused to lodge an FIR in the case and did so after the local Hindus came out in protest.

In a social media response, Mr Husssain  alleged that minorities are not safe in India but his country was committed to protecting its minority communities. “…white colour of our flag is equally dearer to us,” said the Pakistani minister urging the senior Indian minister to address alleged violation of human rights of Indian minority communities.

Pakistan has passed a Hindu marriage law in 2017 which allows greater citizenship rights to the minority community. However, incidents of forced conversion and violence against minority Hindus and Christians continued uninterrupted despite assurances from PM Imran Khan who recently reached out to the Hindu community of his country and promised them equal rights.

USCIRF (United States Commission on International Religious Freedom) has declared Pakistan to be a Country of Particular Concern (CPC) for growing number of violence against religious and sectarian minorities.

Meanwhile, Pakistan Prime Minister Imran Khan has ordered a probe into reports of abduction, forced conversion and underage marriages of the two Hindu girls and to take immediate steps for their recovery.

The Hindu community in Pakistan has carried out massive demonstrations calling for strict action to be taken against those responsible, while reminding Prime Minister Khan of his promises to the minorities of the country.

As the second week of public impeachment hearings got underway, Americans heard from witnesses who could provide firsthand accounts of conversation between U.S. President Donald Trump and Ukrainian President Volodymyr Zelensky. Calling what he heard on the July 25 phone call “inappropriate”, Lieutenant Colonel Alexander Vindman, the top Ukraine expert at the National Security Council, […]

Julian Assange, the founder of WikiLeaks who took refuge in the Ecuadorian Embassy in London in 2012 to avoid being extradited to Sweden over sexual assault charges, has been sentenced to 50 weeks in jail for flouting bail conditions by a court in London. It comes ahead of a hearing due to take place later […]