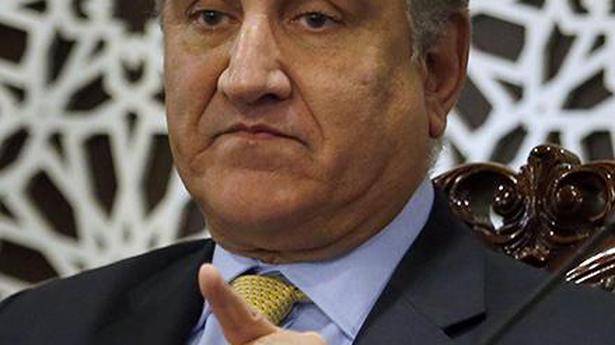 External Affairs Minister Sushma Swaraj and Pakistan’s Foreign Minister Shah Mehmood Qureshi will attend the Shanghai Cooperation Organisation Council of Foreign Ministers in Bishkek, Kyrgyzstan, later this month, for the first time since a proposed meeting between them in New York last September was cancelled.

The two-day meeting, concluding on May 22, a day ahead of the announcement of the Lok Sabha election result, assumes significance ahead of the planned heads of government meeting, also in Bishkek on June 14 and 15. This meeting is expected to be attended by the newly appointed Prime Minister and his Pakistani counterpart, Imran Khan.

Officials in New Delhi and Islamabad confirmed that both Foreign Ministers were “scheduled to attend”, but said there was no proposal for them to meet separately. The SCO summit meet in June will also come just ahead of a plenary session of the Financial Action Task Force in Orlando, U.S., from June 16 to 21, which will deliberate on Pakistan’s grey-listing status on terror financing.

On Monday, in an interview, BJP general secretary Ram Madhav called for Pakistan to take action against terror, setting off speculation that preparations are being made within the government on the possibility of a meeting between Indian and Pakistani Prime Ministers in June.

“Three weeks after the results, we have the SCO [summit meeting],” Mr. Madhav told the Bloomberg news agency. “At the SCO, Prime Minister Imran Khan and Prime Minister Modi will be face-to-face. It’s an opportunity for Pakistan. If something credible comes out in the next one month or so, before the SCO happens, I am sure the relationship will have some improvement. But the onus is on them now,” he added.

Fuelling speculation, a Pakistani newspaper, The News, reported on Monday that the Pakistan government has “informally conveyed to India through China and Russia that the opportunity” of the SCO summit “could be utilised for a bilateral meeting between them”.

An External Affairs Ministry official said it was “too early” to speak about the meeting of the Prime Ministers, and India’s decision to engage with Pakistan was linked to action on terror.

In the wake of the UN Security Council designation of Masood Azhar, New Delhi is watching closely to see what action Pakistan takes against the JeM chief.

The action will also decide whether Pakistan, which is facing a full financial scrutiny by the FATF, could be put on an even more restrictive “blacklist” at the Orlando meeting, which Finance Minister Arun Jaitley called for on Friday.

Dialogue between India and Pakistan has been called off since the Pathankot attack in January 2016. After the Uri attack in September 2016, India also called off its engagement with Pakistan at the SAARC summit, and tensions between the two countries have been at an all-time high since the Pulwama attack in February this year, and airstrikes on Balakot by the Indian Airforce.

Since then, Pakistan has closed its airspace to flights from India, which has led to crores of Rupees in losses for airlines with several flights cancelled due to the long re-routes involved.

Meanwhile, Indian and Pakistani talks over the pending Kartarpur Saheb corridor have also stalled due to India’s concerns over the inclusion of Khalistani separatists in the Gurudwara committee, and any engagement between the two countries at the SCO will be seen as a significant step.

The U.K. is ditching its European Union-style burgundy passports and returning to the traditional British blue – but the documents will be made in the European Union (EU). The British government said on Saturday that passports in the “iconic” navy colour, used between 1921 and 1988, will be issued starting next month. People with the […]

We will forcibly take money from businessmen for NYAY: Rahul

In a sharp response to BJP leaders who termed the minimum income guarantee scheme (NYAY) promised by the Congress as something that could not be implemented, Congress president Rahul Gandhi hit back stating that his party, upon coming to power, would forcibly take money from the pockets of big businessmen who looted the country under […]

The country knows him primarily as a freedom fighter who launched the Swadeshi Steam Navigation Company (SSNC), seeking to put an end to the monopoly of the British in sea trade. But V.O. Chidambaram Pillai (VOC), who was awarded a double life-sentence by the British court, was also a redoubtable Tamil scholar and prolific writer […]