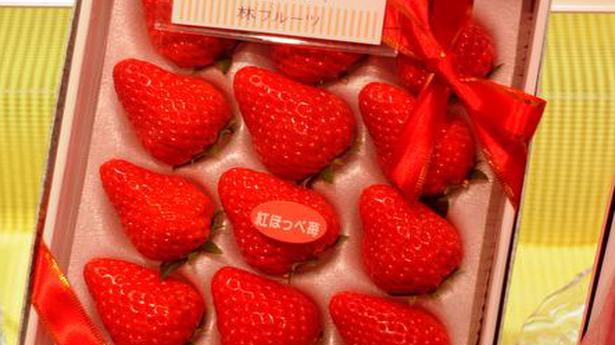 Fruit in Japan conjures up images of the persimmons and plums of classical East Asian art. But no fruit is dearer, in both senses of the word, in contemporary Japan than the strawberry.

From December to May, shop fronts are aglow with this jewel-like fruit that is so much sweeter and more expensive than anywhere else in the world, that second-generation strawberry farmer, Kazutoshi Murata, believes it should be categorised as a different product altogether. “Ichigo (the Japanese word for strawberries) and strawberries are not the same, just like Wagyu and beef can’t be compared,” he claims. When asked to explain, he holds out a ruby-bright fruit the size of a cricket ball and says, “Just eat. No explanation needed.”

Strawberries are arguably the most successful Western import in Japan, outdoing English, and even baseball, in popularity. They first became common in the early Showa Era (1926-89), but in less than a century, have conquered the sweet tooth of the Land of the Rising Sun.

In the varieties of the fruit and the rapture they evoke, strawberries in Japan rival mangoes in India. There were 294 varieties registered with the Ministry of Agriculture, Forestry and Fisheries at the end of 2018. The Tochi Otome (Tochi Maiden) for example, is a relatively small, sweet and fragrant variety, while the Amaou (Sweet King) from Fukouka prefecture boasts of enormous berries, four to five times the average size. The most unique are the disconcertingly white strawberries of Yamanashi prefecture, called Hatsukoi no Kaori (the Scent of First Love). These albino strawberries were first introduced to the market in 2006, following 10 years of research and development. A box of 12 sells in supermarkets for about 1,600 Yen ($14.5).

The prices only get more eye-watering. The most expensive of Mr. Murata’s crop goes for a staggering 7,000 yen ($63) for a dozen. But this is cheap compared to the Bijin-hime (Beautiful Princess) from the Okuda farm in Gifu prefecture, where a single strawberry can cost 50,000 yen ($448). Some of these weigh over 100 g and only about 500 are produced every year.

Fruit in general, not just strawberries, are notoriously expensive in Japan. Speciality melons and grapes, for example, can cost hundreds, even thousands, of dollars. These are given as presents in lieu of luxury chocolates or quality champagne; their high price conveys the status accorded to the person they are being gifted to.

Mr. Murata identifies Japan’s “Christmas culture,” as an additional reason for the high demand for strawberries.

He is referring to a kind of sponge cake that uses layers of whipped cream with fresh strawberries buried inside, that is wildly popular in Japan during the Christmas season. It has become an invented tradition to eat these cakes on December 24 and 25, one reason why strawberry season now kicks off in December, instead of spring, as used to be the case a few decades ago.

But Mr. Murata does not agree that the cost of Japanese strawberries is over the top. According to him the care, technological know-how, and precision that goes into strawberry cultivation justifies the price tag. The primary characteristic distinguishing ichigo from ‘mere’ strawberries, he says, lies in its sweetness. To achieve this, carbon dioxide levels in the soil have to be kept high, at between 400-450 parts per million. This brings the sugar into the fruit in a very concentrated manner. Fertilisers include Vitamin C and collagen combined with uniquely Japanese twists like seaweed, and kombu or edible kelp.

Mr. Murata’s strawberry farm is in Ibaraki prefecture, an agricultural area just north of the capital Tokyo. He has 36 greenhouses, each of which produce over a tonne of strawberries annually. It’s a decent living, he said, but not an easy one. Given Japan’s declining and ageing demographic, finding farm hands is difficult. Consequently, he employs about half-a-dozen young workers from Indonesia to help out. “We learn many things about farming here,” one of them said shyly, eyes never leaving the tray of strawberries he was busy sorting. When asked what he liked best about Japan, he smiled, finally making eye contact, “Ichigo, of course.”

Pallavi Aiyar is an author and journalist based in Tokyo

Decolonisation must be guided by aspirations, needs of communities living in territories: UN chief

With 17 non-self-governing territories remaining worldwide, United Nations chief Antonio Guterres has said that decolonisation is a process that has to be guided by the aspirations and needs of the communities living in the territories. At the opening of the latest session of the UN Special Committee dealing with decolonisation, Secretary-General Guterres on Friday said […]

Saudi Arabia has allowed adult women to travel without permission and granted them more control over family matters, further eroding a heavily criticised male guardianship system at a time of heightened scrutiny over its human rights record. A series of royal decrees published by the official gazette on Friday stipulated that a Saudi passport should […]