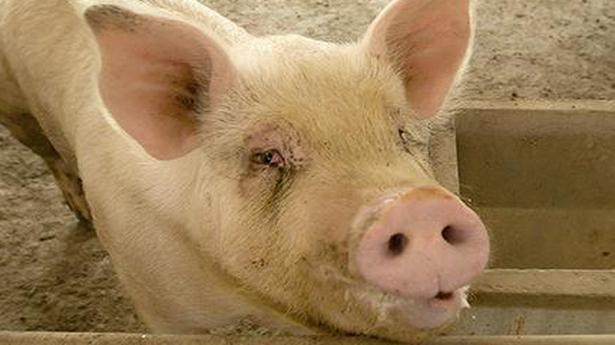 As many as half of China’s breeding pigs have either died from African swine fever or been slaughtered because of the spreading disease, twice as many as officially acknowledged, according to the estimates of four people who supply large farms.

While other estimates are more conservative, the plunge in the number of sows is poised to leave a large hole in the supply of the country’s favourite meat, pushing up food prices and devastating livelihoods in a rural economy that includes 40 million pig farmers. Losses are not only from infected pigs dying or being culled, but also farmers sending pigs to market early when the disease is discovered nearby, which analysts say has kept a lid on pork prices recently.

“Something like 50% of sows are dead,” said Edgar Wayne Johnson, a veterinarian who has spent 14 years in China and founded Enable Agricultural Technology Consulting, a Beijing-based farm services firm with clients across the country.

Three other executives at producers of vaccines, feed additives and genetics also estimate losses of 40% to 50%, based on falling sales for their companies’ products and direct knowledge of the extent of the deadly disease on farms across the country.

Losses are not only from infected pigs dying or being culled, but also farmers sending pigs to market early when the disease is discovered nearby, farmers and industry insiders have told Reuters, which analysts say has kept a lid on pork prices in recent months.

However, prices began rising substantially this month and China’s agricultural ministry has said they could surge by 70% in coming months as a result of the outbreak. Pork accounts for more than 60% of Chinese meat consumption.

China, which produces half the world’s pork, said this month its sow herd declined by a record 23.9% in May from a year earlier, a slightly deeper drop than for the overall pig herd.

Sows, or adult females bred to produce piglets for slaughter, account for roughly one in 10 pigs in China. A decline in the sow herd usually equates to a similar drop in pork output, industry experts say.

The Ministry of Agriculture and Rural Affairs did not respond to a fax seeking comment on claims of much higher losses than officially reported. It said on June 24 the disease has been “effectively controlled”, state news agency Xinhua reported.

Sweden on Tuesday dropped its investigation into an alleged rape by WikiLeaks founder Julian Assange, who is currently in prison in Britain. Assange, who is battling extradition to the United States which accuses him of publishing secret documents related to his WikiLeaks work, has been facing potential charges in Sweden since 2010. The 48-year-old has […]

Five centuries ago, newly arrived in what is now Mexico, the Spanish conquistadors banned an indigenous game involving a heavy ball, circular stone goals and human sacrifice. Now, a group of young players are bringing the game back to life for the first time in Mexico City — without the human sacrifice — at the […]

Spanish Prime Minister Pedro Sanchez’s Socialists won snap elections on Sunday without the necessary majority to govern solo in a fragmented political landscape marked by the far-right’s entry into parliament. The results raise the spectre of another period of instability for Spain, with Sanchez depending on alliances with hostile rivals in an environment that has […]