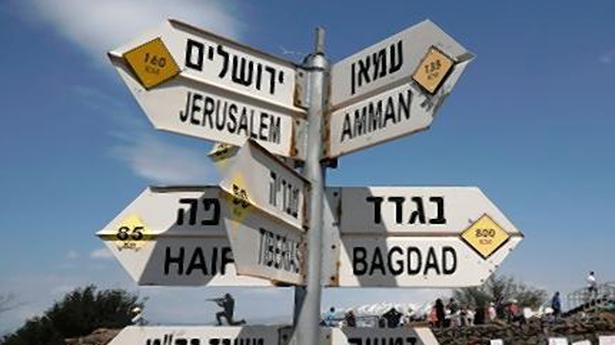 The Syrian government vowed to take back the Israeli-occupied Golan Heights as its allies and enemies alike condemned U.S. President Donald Trump on Friday for moving to recognise Israeli sovereignty over the territory seized in war.

Mr. Trump’s statement on Thursday marked a dramatic shift in U.S. policy over the status of a disputed area that Israel captured from Syria in the 1967 conflict and annexed in 1981 — a move not recognised internationally.

Against this backdrop of hostility towards the U.S. move, Secretary of State Mike Pompeo landed in Beirut on Friday after visiting Israel. He is expected to raise pressure on the government to curb the influence of the Iran-backed Hezbollah.

Russia, an ally of President Bashar al-Assad with forces in Syria, said Mr. Trump’s comments risked seriously destabilising the region, and it voiced hope the statement was just declaratory.

Iran, Mr. Assad’s main regional ally and which also has forces in Syria, condemned the statement as illegal and unacceptable. “The personal decisions of Trump…will lead to crisis in the region,” Iran’s foreign ministry spokesman said.

Turkey, a U.S. ally and an adversary of Damascus, also said the move had brought the Middle East to the edge of a new crisis and the legitimisation of the occupation of the Golan Heights could not be allowed.

Israeli Prime Minister Benjamin Netanyahu thanked Trump for his gesture “at a time when Iran seeks to use Syria as a platform to destroy Israel”. It could help Netanyahu in the midst of a tough re-election battle, analysts said.

The Syrian government said the Golan was an “indivisible” part of Syrian territory and recovering it “via all means guaranteed by international law is still a priority”.

It said United States with its “stupidity and arrogance” had no right to decide the fate of the area and any move to recognise Israeli sovereignty over it was “an illegal action with no impact”.

After remaining calm for decades since a 1974 armistice monitored by U.N. peacekeepers, Golan re-emerged as a flashpoint for regional tensions during the Syrian war. Last May, Israel accused Iran’s Revolutionary Guards of launching a rocket salvo into its territory from the Syrian side of the truce line.

Israel, which has mounted numerous air strikes against what it has called Iran-backed targets in Syria, has demanded Russia keep forces allied to Tehran away from the boundary.

The Syrian side was held by rebel forces for years until pro-government forces recovered it in July.

U.S. official: Israel “could not give up the Golan”

Jason Greenblatt, a senior White House adviser, said “under any conceivable circumstance, Israel could not give up the Golan”. “To do so would endanger Israel’s very existence,” he wrote on Twitter.

But Fouad Mundhir, a Syrian whose village is in Israeli-occupied Golan, said Trump was “canceling the will of an entire nation”. “You say you are carrying the flag of democracy, okay, Mr. Trump, have you taken into account the will of the people of the Golan?” he told Reuters in Jaramana, near Damascus.

In the Golan itself, Druze villager Sheikh Mahmoud Nazeeh, also rejected the move.

“Trump can make his statements and say he wants to make the Golan part of Israel. But we know this will stay Syrian land,” the 70-year-old said.

The European Union said its position on the status of the Golan Heights was unchanged and it did not recognise Israeli sovereignty over the area.

Germany said any change in borders should be “done through peaceful means between all those involved”, while France said it did not recognise the Israeli annexation of the Golan Heights and any recognition was contrary to international law.

The Arab League, which suspended Syria in 2011 after the start of its civil war, said Trump had paved “the way for official American recognition” of Israeli sovereignty over the Golan and called this “completely beyond international law”.

Egypt, which made peace with Israel in 1979, said it still considers the Golan as occupied Syrian territory.

Israel says Syria’s civil war has reaffirmed the need to keep the plateau – coveted for its water resources and fertile soil – as a buffer zone between Israeli towns and the instability of its neighbour.

In Lebanon, Pompeo is expected to flag U.S. concerns about Shi’ite Muslim Hezbollah’s growing role in government: the group has three cabinet ministers and together with its allies controls more than 70 of parliament’s 128 seats.

The United States is a major donor to the Lebanese army but its allies, including the Sunni Muslim Prime Minister Saad al-Hariri, have been weakened as Iran’s role has deepened through Lebanon, Iraq and Syria and Saudi influence has receded.

Washington has reintroduced sanctions on Iran and imposed new financial sanctions on Hezbollah which Lebanon’s Hezbollah-aligned president, Michel Aoun, said on Thursday were hurting all Lebanese.

30 years on, an ultra-marathon to remember Berlin Wall victims

Where guard towers and barbed wire once stood, runners pouned the 160 km path along the former Berlin Wall on Saturday. Around 500 runners, started the 8th edition of the Berlin Wall Race, ahead of the 30th anniversary of the Wall’s demise this November. With weary legs, most runners will jog through Saturday night, aiming […]

Russia’s foreign minister will visit Washington next week for talks with Secretary of State Mike Pompeo, U.S. officials said Friday. Mr. Pompeo will host Mr. Sergey Lavrov on Tuesday for talks that are expected to be followed by a joint news conference, two officials said. It was not immediately clear if Lavrov planned other meetings […]

Presidential hopeful Gotabaya Rajapaksa is in the lead in Sri Lanka’s southern districts, after about 10 million votes were counted by Sunday morning, according to an official of the Election Commission. A voter turnout of about 80 % was recorded in Saturday’s presidential poll, in which nearly 16 million voters were eligible to cast their […]