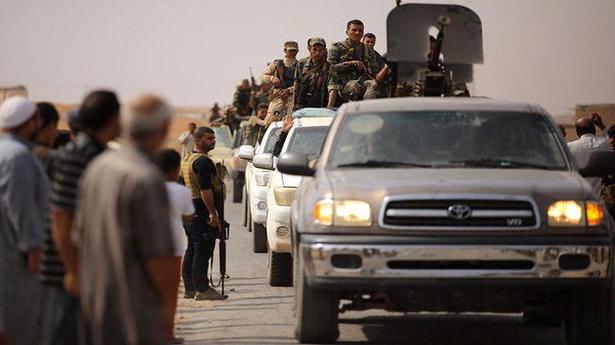 Russia-backed Syrian forces wasted no time in taking advantage of an abrupt U.S. retreat from Syria on Monday, deploying deep inside Kurdish-held territory south of the Turkish frontier less than 24 hours after Washington announced a full withdrawal.

Kurdish forces, Washington’s former allies, said they invited in the government troops as an “emergency measure” to help fend off an assault by Turkey, launched last week with “a green light” from President Donald Trump that the Kurds describe as a betrayal.

The Syrian government’s deployment on Monday is a major victory for President Bashar al-Assad and his ally Russia, who gained a military foothold across the biggest swathe of the country that had been beyond their grasp. Under their deal with the Kurds, government forces are poised to move into border areas from the town of Manbij in the west to Derik, 400 km to the east.

Syrian state media reported that troops had already entered Tel Tamer, a town on the strategically important M4 Highway that runs east-west around 30 km south of the frontier with Turkey.

State TV later showed residents welcoming Syrian forces into the town of Ain Issa, which lies on another part of the highway, hundreds of km away.

Ain Issa commands the northern approaches to Raqqa, former capital of the Islamic State “caliphate”, which Kurdish fighters recaptured from the militants two years ago in one of the biggest victories of a U.S.-led campaign.

Much of the M4 lies on the southern edge of territory where Turkey aims to set up a “safe zone” inside Syria. Turkey said it had seized part of the highway. An official of the Kurdish-led Syrian Democratic Forces (SDF) said clashes were ongoing.

The swift Syrian government deployments came as the strategy the U.S. has pursued in Syria for the past five years crumbled overnight. Washington announced on Sunday it was abruptly pulling out its entire force of 1,000 troops which had fought alongside Syrian Kurds against Islamic State since 2014.

Kurdish officials described the new arrangement with Mr. Assad’s forces as a “preliminary military. “After the Americans abandoned the region and gave the green light for the Turkish attack, we were forced to explore another option, which is talks with Damascus and Moscow to find a way out and thwart these Turkish attacks,” senior Kurdish official Badran Jia Kurd said.

Turkish President Tayyip Erdogan said that the battle would continue until “ultimate victory” is achieved. “We are determined to continue the operation until the end, without paying attention to threats. We will finish the job we started.”.

Iran said on Tuesday it had arrested an undisclosed number of suspects accused of a role in shooting down a Ukrainian airliner, as anti-government demonstrations triggered by the disaster entered a fourth day. Wednesday’s shooting down of Ukraine International Airlines flight 752, killing all 176 people on board, has led to one of the greatest […]

Argentina’s Peronists celebrated their return to power after incumbent President Mauricio Macri conceded defeat in a dramatic election that likely swung the country back to the center-left, saw the return of a divisive former President and threatened to rattle financial markets. As investorseyed Monday’s market opening, thousands of jubilant supporters of Alberto Fernŕndez and his […]

The U.S. government’s recent decision to remove legal limits on how long migrant children can be detained clearly flouts international law, the UNHCR chief said on Wednesday. Michelle Bachelet voiced concern over the move by the administration of President Donald Trump last month to allow migrant children and their families to be detained for unlimited […]