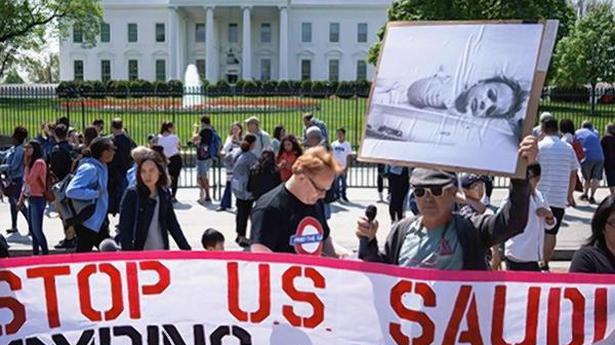 A piece of U.S. law known as the War Powers Resolution has been in the news of late. On April 16, President Donald Trump issued the second veto of his presidency to overrule a resolution from the U.S. Congress that directed the withdrawal of troops involved in the Saudi Arabia-led war in Yemen. The Yemen resolution had passed the Senate 54-46 in March and the House of Representatives 247-175 earlier in April.

The conflict in Yemen, which started in 2015, has killed more than 10,000 civilians and displaced more than two million people and put millions at risk of famine. Lawmakers on both sides of the aisle have pushed back against the Trump administration’s policy of courting Saudi Arabia and not taking adequate measures to punish the regime and Saudi Crown Prince Mohammad bin Salman, who was implicated in the murder of columnist Jamal Khashoggi. Part of this pushback has manifested in a call, including from some Republicans, to end U.S. assistance to Saudi Arabia in the Yemen conflict. (Instances of Capitol Hill’s opposition to U.S. involvement in Yemen predate the murder of Khashoggi).

The U.S announced in November, presumably due to internal pressure, that it would no longer be fuelling Saudi airplanes but said it would continue to share intelligence with and provide logistics to the Saudis. The Yemen resolution passed proscribes in-flight fuelling of non-U.S. aircraft engaged in the Yemen conflict but it permits military operations against al-Qaeda.

Mr. Trump, who had threatened to veto any resolution of this nature, went ahead and did just that. “This resolution is an unnecessary, dangerous attempt to weaken my constitutional authorities, endangering the lives of American citizens and brave service members, both today and in the future,” he wrote to the Senate in a letter.

In response, Senator Bernie Sanders, who sponsored the resolution, asked his colleagues to override the veto, drawing into focus the War Powers Resolution. “For far too long Congress, under both Democratic and Republican administrations, has abdicated its constitutional role with regard to the authorisation of war. The historic passage of this resolution… was a long overdue step by the Congress to reassert that authority,” Mr. Sanders wrote, adding, “The Congress must now act to protect that constitutional responsibility by overriding the President’s veto.”

The War Powers Resolution was enacted in 1973 during the Vietnam War to structure the Congress and the President’s role in declaring war. The President has to get the Congress’s authorisation within 60 days of committing troops abroad, as per the resolution. If the Congress denies such authorisation, the troops are to be withdrawn within 30 days.

There are also clauses in the resolution that require the President to consult with and report to the Congress during an armed engagement. The White House, as is evident from Mr. Trump’s response, considers the War Powers Resolution inapplicable in this situation because the type of support the U.S. provides does not constitute direct engagement in conflict.

Mr. Trump is not alone in testing the limits of his war powers. Since its enactment, the resolution’s scope and contours have been tested by most, if not all, Presidents. For the Congress to now override Mr. Trump’s veto, a two-thirds majority in both the House and the Senate is required.

There remains the very real possibility that the conflict between the Congress and the President will find its way to the Supreme Court where the constitutionality of the War Powers Resolution will have to be examined and addressed.

Due to lack of up-to-date IT systems, offices in the country have not been able to nurture flexible work practices Source: thehindu.com Related