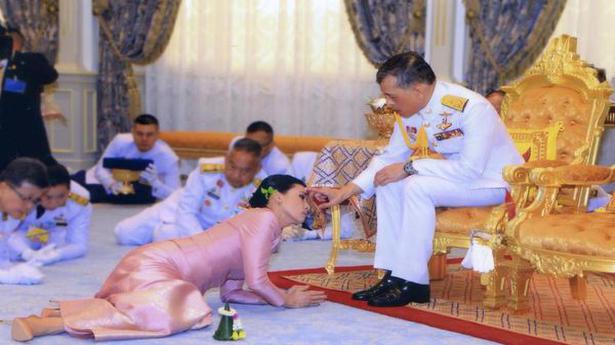 Just days before his official coronation, Thailand’s King Maha Vajiralongkorn on Wednesday married the deputy head of his personal guard force and gave her the title Queen Suthida.

The surprise announcement was carried in the Royal Gazette, and footage from Wednesday’s wedding ceremony was later shown on the nightly Royal News segment aired on all Thai television channels.

Vajiralongkorn, 66, also known by the title King Rama X, became constitutional monarch after the death of his revered father, King Bhumibol Adulyadej, in October 2016, after 70 years on the throne.

He is due to be officially crowned in elaborate Buddhist and Brahmin ceremonies on Saturday, followed by a procession through Bangkok the next day.

In 2014, Vajiralongkorn appointed Suthida Tidjai, a former flight attendant for Thai Airways, as a deputy commander of his bodyguard unit.

Some royal observers and foreign media had linked Suthida romantically with the king, but the palace had previously never acknowledged a relationship between them.

The king made Suthida a full general in the Royal Thai Army in December 2016, and the deputy commander of the king’s personal guard in 2017. He also made her a Thanpuying, a royal title meaning Lady.

Thai television, which broadcast the royal order Wednesday evening, showed a video of Suthida prostrating herself before the king, to whom she, according to the announcer, presented a tray of flowers and joss sticks, and in return was bestowed traditional gifts associated with royal power.

It also showed the king in a white uniform and his bride in a pink silk traditional dress formally registering their marriage on Wednesday in his palace residence in the capital, Bangkok. It showed what the television announcer said was the couple signing a marriage certificate book, which was also signed by the king’s sister, Princess Sirindhorn, and Privy Council head Prem Tinsulanonda as witnesses.

Among the dignitaries at the wedding were Prayuth Chan-ocha, the leader of the military junta that has run Thailand since a 2014 army coup, as well as other members of the royal family and palace advisers, the wedding footage showed.

Vajiralongkorn has previously been married and divorced three times and has seven children.

While the king took the throne after the death of his father, his formal coronation follows a mourning period for King Bhumibol, whose royal cremation was held a year after his death.

(With inputs from Associated Press)

Viral outbreak of coronavirus that began in China has infected more than 64,000 people globally. The World Health Organization (WHO) has named the illness Covid-19, referring to its origin late last year and the coronavirus that causes it. The latest figures reported by each government’s health authority as of Friday in Beijing: Mainland China: 1,380 […]

Music legend Elton John is celebrating 29 years of abstinence from alcohol and drugs. The 72-year-old singer took to Instagram on Monday to share the news. “29 years ago today, I was a broken man. I finally summoned up the courage to say 3 words that would change my life: ‘I need help’ “Thank-you to […]

Negotiators work through the night to salvage U.N. climate summit

Negotiators worked into the early hours of Sunday to try to salvage a strong global commitment to fight climate change after some of the most vulnerable nations said they were being sidelined at a marathon U.N. summit in Madrid. Talks were scheduled to conclude on Friday but lurched into a second extra day as major […]