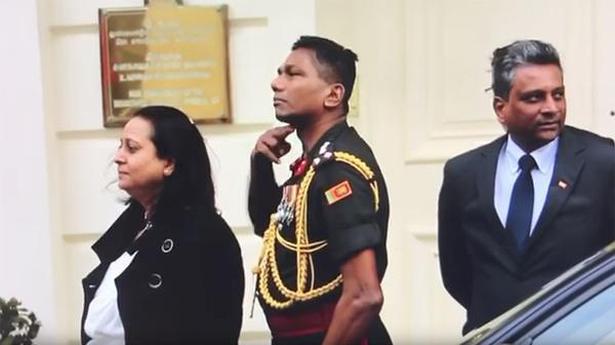 On February 4, 2018, Sri Lanka’s Independence Day, a group of Tamil protesters gathered outside that nation’s Embassy in London — some waving Tamil Eelam flags, some carrying placards calling for the release of political prisoners in Sri Lanka and for the details of people still missing from the conflict to be released. Among those coming in and out of the building was the Embassy’s defence attaché Brigadier Priyanka Fernando, a former member of the Sri Lankan Army’s 59 division which was involved in many of the frontline battles with the LTTE.

Brigadier Fernando, who had been posted to London a year earlier, was filmed, in military uniform, making several “throat-cutting gestures” towards those protesting outside, before going back inside. The incident triggered much distress among protesters, with several filing complaints with the police across London. The Brigadier was suspended as pressure for action continued to build. After MPs raised the issue in Parliament, the British government insisted that it and the Sri Lankan government took the case “very seriously”. Nevertheless, though stripped of his position, Brigadier Fernando was able to leave the U.K. last year without any charges.

However, a private prosecution has been mounted by three men involved in the protest and in January, the Brigadier was convicted — in his absence — of threatening behaviour towards protesters. However, confusion swiftly followed and an arrest warrant initially issued was hastily withdrawn, amid questions about the Brigadier’s status as a diplomat. His defence — backed up by Britain’s Foreign and Commonwealth Office — contended that he enjoyed diplomatic immunity at the time of the protest. However, in a recent hearing, the judge, while accepting that he was covered by diplomatic immunity on the day of the incident, concluded that as he was no longer a diplomat and as the role he was carrying out at the time didn’t count as an “act performed in the exercise of his functions”, he no longer had diplomatic immunity.

“It was not part of Brigadier Fernando’s job description to make the alleged cut-throat gestures on the three occasions, it could not be part of the mission’s function,” concluded Chief Magistrate Emma Arbuthnot of Westminster Magistrates Court (incidentally the same judge who ordered liquor baron Vijay Mallya’s extradition). The next hearing is set to take place on March 15, where the judge will consider the case, though campaigners are hopeful that it will result in an arrest warrant being issued, piling pressure on Sri Lanka to return the Brigadier to London.

Home to a sizeable Tamil population (the total Sri Lankan-born population of the U.K. is around 1,35,000, according to the latest figures from the Office of National Statistics), London has long been a centre for protests against the Sri Lankan government. In 2009, large protests took place in Parliament Square, while more on a smaller scale have continued to take place since.

The diaspora has repeatedly raised issues with parliamentarians. During a parliamentary debate in 2017, several people expressed concerns about ongoing conditions in Sri Lanka, including allegations of torture, progress made on demilitarisation, and judicial mechanisms for looking into wrongdoings during the conflict.

Winning the case has huge significance, says T.U. Senan of the London-based group Tamil Solidarity, which has accused the Sri Lankan government of embarking on a “witch-hunt” against the U.K.-based activists.

The organisation also expressed its concerns about one of the details that emerged during the course of the hearings — the Brigadier’s job description, which included monitoring “anti-Sri Lankan activities in the U.K. and reporting them” clearly shows that “the Sri Lankan government is on a witch-hunt against activists and protesters who are after justice and many other demands that have been denied to the minorities of Sri Lanka,” the Tamil Solidarity said in a statement after the hearing.

“Imagine what would happen if this had been another Embassy — death threats are just not acceptable,” says Mr. Senan. “If people like him can do this in the U.K. imagine what they could do in Sri Lanka.”

In a press briefing Thursday, Dr. Hans Kluge warned that even more drastic steps could be taken if the pandemic does not recede Source: thehindu.com Related

The former VP wins Democratic nomination at a crucial time for the U.S. Source: thehindu.com Related