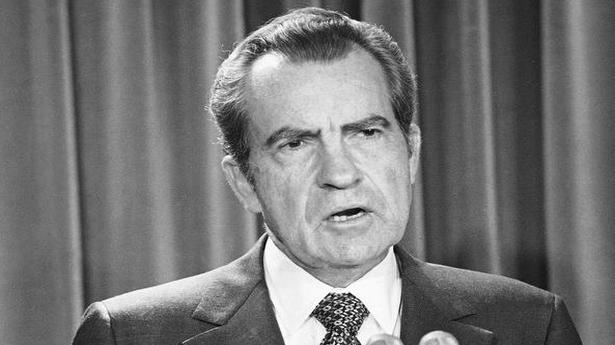 On Wednesday, the Supreme Court dismissed the government’s plea to declare the Rafale jets’ purchase a secret, instead upholding free speech and the right of The Hindu to publish a series of articles since February 2019 on the defence deal.

Writing the main judgment, Chief Justice Ranjan Gogoi adopted the U.S. Supreme Court logic in its June 30, 1971 verdict on the Pentagon Papers. By a 6-3 majority, the U.S. Supreme Court ruled that the government had not met “the heavy burden of showing justification” for stopping publication of the Pentagon Papers in The New York Times and the Washington Post as endangering national security. “We do not see how the principle of law (in the U.S. SC judgment) will not apply to the facts of the present (Rafale) case,” Chief Justice Gogoi said.

What were the Pentagon Papers and why was the Nixon administration hellbent on restraining its publication? What did the newspapers do?

What are the Pentagon Papers?

Sometime in the middle of 1967, the U.S. Secretary of Defence Robert McNamara, without the knowledge of President Lyndon Johnson, commissioned a study on the decisions that led America into the Vietnam War, titled “History of the United States Decision-Making Process on Vietnam Policy, 1945-1967”, which came to be known as the Pentagon Papers. In her memoir, Personal History, Katharine Graham, publisher and owner of the Post, says McNamara, who was a friend, started the study “to bequeath to scholars the raw material from which they could re-examine the events of the time.”

How did it get published?

On June 13, 1971, The New York Times, which had found out about the study on the Vietnam War, devoted the top half of its front page to an article written by its legendary Vietnam reporter Neil Sheehan, and six pages with stories and documents from the 47-volume, 7,000-page study. One report said the consensus to bomb Vietnam developed before the 1964 election, and that the sustained bombing, known as the Rolling Thunder, began three months after the election. The Post did not have the Papers yet. In A Good Life, Newspapering and Other Adventures, Ben Bradlee, then executive editor of the Post, says his reporters were trying desperately to get their own copy and stop rewriting the competition.

What did the Nixon administration do?

On June 15, the Justice Department went to court and got an injunction against the NYT asking it to stop publishing any more articles from the study. Nixon was President and this was the first time such a thing had happened in the American press. The Times went to court. In the meantime, at the Post, its National Editor Ben Bagdikian “had guessed that Daniel Ellsberg was the source” for the NYT scoop and finally got the Papers from the Harvard intellectual, a defence research expert who had worked for the Rand Corporation and had volunteered for Vietnam.

By June 16, the Post too had the papers, but now had to work under the “added pressure of knowing that the Times had been enjoined from further publication and that The Washington Post Company was about to go public.” While the reporters and Bradlee pushed strongly for publishing, the Post’s lawyers were adamant against it. Both Graham and Bradlee’s accounts are nerve-wracking. Graham recalls Bagdikian telling the lawyers of the commitment he gave Ellsberg to publish the Papers with these words: “The only way to assert the right to publish is to publish.” Bradlee gives an hour by hour description of the tense discussions: “Not publishing the information when we had it would be like not saving a drowning man, or not telling the truth. Failure to publish without a fight would constitute an abdication that would brand the Post forever, as an establishment tool of whatever administration was in power,” he writes.

Finally, a call was placed to Graham who told Bradlee, even as her lawyers were aghast, “Okay, I say let’s go. Let’s publish.” Standing up to the government showed Graham had “guts and commitment to the First Amendment” and supported her editors, permanently “changing the ethos” of the paper.

What happened in court?

With both the NYT and Post landing up in court, the Pentagon Papers moved from one room to another in New York and Washington, the respective headquarters of the papers, with everything from national security, treason, espionage being thrown at them from the government, before it landed up in the Supreme Court. On June 26, the two cases of the NYT and the Post were heard together for the first time at a special session of the Supreme Court. Four days later, Chief Justice Warren Burger announced the decision. The NYT reported: “By a vote of 6 to 3 the Court held that ‘any attempt by the Government to block news articles prior to publication bears a heavy burden of presumption against its constitutionality’. In a historic test of that principle — the first effort by the Government to enjoin publication on the ground of national security — the Court declared that ‘the Government has not met that burden’.’’

Pakistan’s Foreign Minister Shah Mahmood Qureshi on Saturday said the Kashmir issue would continue to remain the “cornerstone of Pakistan’s foreign policy“. Chairing a meeting here with the leaders from Pakistan-occupied Kashmir as a follow-up to Prime Minister Imran Khan’s address to the PoK’s Legislative Assembly in Muzaffarabad on February 5, Mr. Qureshi said that […]

China to lift lockdown in most of virus-hit Hubei province

Chinese authorities are lifting a lockdown in most of its virus-hit Hubei province. People who are cleared will be able to leave the province after midnight Tuesday. The city of Wuhan, where the outbreak started in late December, will remain locked down until April 8. China barred people from leaving or entering Wuhan starting Jan. […]

On a day when External Affairs Minister S. Jaishankar had said that he was “reasonably convinced” of persuading the U.S. to accept India’s decision on the purchase of the Russian S-400 missile defence system, U.S. officials warned that any such purchases may risk sanctions. “We urge all of our allies and partners to forgo transactions […]