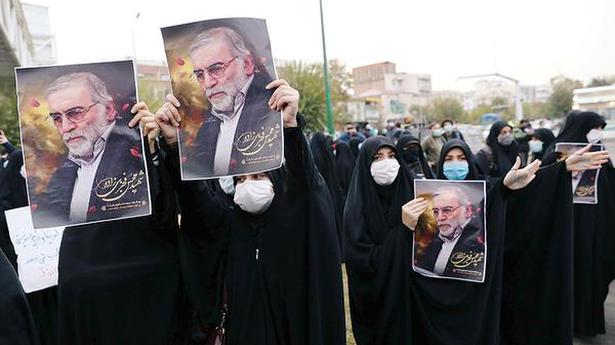 What does a new Iran law on uranium enrichment mean for it’s nuclear programme? Why is Iran President Hassan Rouhani opposed to the legislation?

The story so far: The assassination of Mohsen Fakhrizadeh, a top Iranian nuclear physicist, on November 27 on the outskirts of Tehran has turned the spotlight back on Iran’s nuclear programme as Joe Biden prepares to assume the U.S. Presidency. Mr. Biden had promised during his campaign to take the U.S. back to the Iran deal, which President Donald Trump had abandoned. But after Fakhrizadeh’s killing, Iranian lawmakers moved quickly to pass a Bill that would set a timeline for the government to strengthen the country’s nuclear programme.

What does the law mean for Iran’s nuclear programme?

The new law, if approved by the Supreme Leader, would oblige the government to raise the levels of nuclear enrichment in its key facilities — Natanz and Fordow — and deny access to UN inspectors to these sites. According to the Joint Comprehensive Plan of Action (JCPOA), as the 2015 nuclear deal is called, there is a 3.67% cap on Iran’s uranium enrichment.

Low-enriched uranium, which has a 3-5% concentration of Uranium-235, can be used to produce nuclear fuel for power plants. Under the new law, which has been passed in Parliament and got the clearance of the Islamic constitutional watchdog Guardian Council, the government should raise the enrichment levels to 20% if the European signatories to the JCPOA do not provide relief to Iran from sanctions within two months. It also mandates the government to install advanced centrifuges in its nuclear plants for higher enrichment.

Tehran began violating the deal after President Trump pulled the U.S. out of the JCPOA in 2018 and re-imposed sanctions on Iran. The Islamic Republic has breached the caps for both uranium stockpile and enrichment. According to a confidential report by the International Atomic Energy Agency (IAEA), which was leaked to the press, Iran, as of November 2, had a stockpile of 2,442 kg of low-enriched uranium, up from the 202.8 kg cap set by the nuclear deal. The same report stated that Iran is enriching uranium to a purity of 4.5%, up from the 3.67% threshold. Before the nuclear deal was signed, Iran had a stockpile of 7,000 kg of 20% enriched uranium. The 20% purity is a technical step away from the weapons-grade level of 90%.

Now, by producing more nuclear fuel and seeking to gradually raise the purity, the new legislation requires the government to go back to the pre-nuclear deal capacities. However, there is no consensus in the Iranian regime on the way forward. President Hassan Rouhani has publicly voiced his opposition to the Bill.

Why is Mr. Rouhani opposed to the legislation?

President Rouhani’s opposition suggests that the Iranian government is still hopeful that the nuclear deal could be revived under a Biden administration. The legislation would be “harmful” to diplomatic efforts to restore the deal and easing sanctions, said Mr. Rouhani. The violations Iran has already announced can easily be rolled back if an understanding is reached with the U.S. in the next few months. Even when Iran started raising the fuel stockpile, it continued to allow full access to the IAEA to its facilities. This was one of the reasons the other signatories did not abandon the accord. But if the Bill is approved and Iran blocks access to nuclear inspectors to its sites, it could be seen as a major provocation. By voicing his opposition publicly, Mr. Rouhani has given credence to the argument that the regime is divided on what its response should be. Mr. Rouhani, however, does not have the power to veto the Bill. If he declines to sign it, the Parliament Speaker could sign it and send it to the Supreme Leader, Ali Khamenei, who takes the final call.

A lot depends on Mr. Biden’s policy on Iran. If he reopens the diplomatic path, takes the U.S. back to the deal and at least eases some sanctions, it could bring the deal back to life. If he seeks more concessions from Iran as a precondition to rejoin the deal, as he suggested in a recent interview, it could prolong the crisis and strengthen the hands of the already powerful hardliners in the regime.

One in six children living in extreme poverty, figure set to rise during pandemic: UN

Bangladesh’s cricket team escaped from a deadly shooting at a mosque in Christchurch, New Zealand, an official told AFP on Friday.   Bangladesh Cricket Board spokesman Jalal Yunus said most of the team were in the bus and about to go inside when the incident happened. “They are safe. But they are mentally shocked. We […]