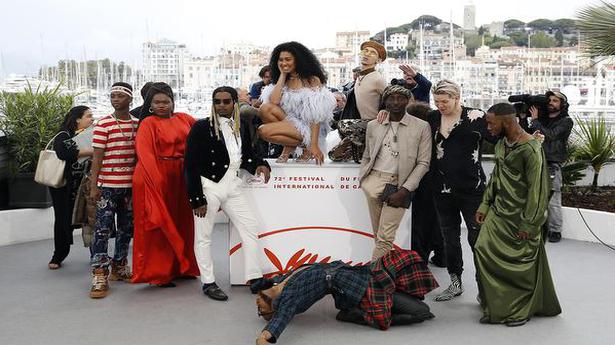 It can be a bit startling to find “Jawani jaaneman” from Amitabh Bachchan’s Namak Halal (1982) blaring loudly on a Sunday morning at the Arcades theatre in Cannes with Parveen Babi dancing away on the screen. The popular song is part of a film screening within the film in the opening credits of Shahrbanoo Sadat’s The Orphanage. After a set of Indian gods forming the background in a sequence in Pedro Almodovar’s Pain and Glory, it is cine idol Amitabh Bachchan, and the songs from his films, that loom large in Sadat’s film playing in the Directors’ Fortnight sidebar at the Cannes Film Festival.

The portrayal of the life of adolescent boys in an orphanage in Afghanistan, the film showcases Hindi cinema as the stuff of their dreams fantasies, specially the protagonist Qodratollah, who doesn’t just sport the Big B haircut and T-shirt but even black-market tickets of his Shahenshah at the Cinema Shahr theatre in Kabul. Bollywood — in the form of photos and posters of stars like Big B, Rekha and Sridevi — is a passion as big as football and chess for all the residents like him. It is an escape and a refuge from the Dickensian squalor.

Meanwhile, all of Qodratollah’s own emotions — be it love or loss — are mediated by Bollywood (read Mr. Bachchan) songs to the extent that he imagines himself into the film sequences — “Jaane kaise kab kahan iqrar ho gaya” (Shakti) or “Zindagi to bewafa hai ek din thukrayegi” (Muqaddar Ka Sikandar).

Geo-politics plays on in the background — President Najib, the close alliance with the former USSR, the visit of the children to the Soviet Pioneer camp and the eventual transformation of the country from a republic into an Islamic state with the takeover by the Mujahideens.

Ironically, even as the filmi obsession of the children endears, the active use of the larger-than-life arc and melodrama of Bollywood in the film makes its tone highly uneven and jarring. The political acuity is lost by rendering it with Bollywood beats, almost turning the film into a farce and reducing much of its impact.

The Orphanage is the second in the series of films planned by Ms. Sadat that are based on the unpublished diaries of Anwar Hashimi. The first — Wolf and Sheep — which also happened to be her debut film, won the top award at the Directors’ Fortnight in 2016.

In the introduction to the Un Certain Regard screening of her debut film Port Authority (executive-produced by Martin Scorsese), Danielle Lessovitz’s said that the film was all about love. Sensual, sensitive, joyous yet anguished it got a lot of love, and a long standing ovation, in return from the audience, at the end of the screening.

Young Paul, on probation, arrives at the Port Authority bus station in New York from Pittsburgh to find himself stranded, abandoned by the half-sister who was supposed to pick him up and take him under her wing. He is instantly struck by and attracted to Wye who he sees from a distance and slowly finds himself entering her world and that of her siblings.

It sets the base for a deep dive into the subculture of the homeless and the underprivileged, of the queers on the absolute periphery of the society and also of voguing and the Kiki ballroom culture. There’s a broad spectrum of the marginalised on view — from a “White Boy Realness” to a “femme queen” and varied set of “faggots”. Much like the Hirokazo Kore-eda’s Palme D’Or winner last year — Shoplifters — there’s a proxy, non-biological family in Port Authority as well that is just as fragile and vulnerable. And at the heart of it all is an unusual romance that blossoms between Paul and Wye — heartachingly intense, tender but precariously perched on sexual identity issues that the lovers have to confront and fight within themselves.

Swinging between the intimacy of desire and ecstasy of dance and the several obstacles in the way of passion, Mr. Lessovitz crafts an empathetic, non-judgmental vision that underscores the power of love. One that had the Cannes audience clapping in tune with the voguing beats.

UN experts have recommended blacklisting 14 vessels for violating sanctions against North Korea in a report that accuses the country of increasing illegal coal exports, imports of petroleum products and continuing with cyber attacks on financial institutions and cryptocurrency exchanges to gain illicit revenue. The 267-page report, obtained Saturday by The Associated Press, also accused […]

Two dead, one arrested after shooting near synagogue in eastern German city of Halle

Several shots were fired on October 9 in the eastern German city of Halle, leaving two people dead as the suspected assailants fled, police said. One person was killed near a synagogue on the Jewish holy day of Yom Kippur and a witness reported that a nearby kebab shop also was attacked. Police said in […]