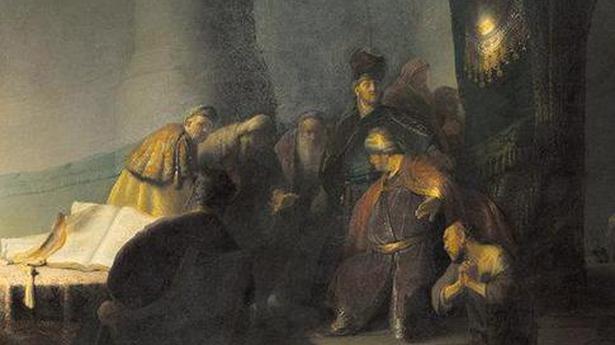 The charcoal illustration on the front of the London Saturday Journal, a popular Victorian magazine, published in late March 1841, pictured a rather sinister looking man, with a cap in hand and a sack on his back looking slyly at the reader. Entitled “The Jew Old Clothes Man”, an article inside the magazine goes on to describe Jewish second-hand clothes sellers in London in particularly prejudiced terms.

The cover is one of the many chilling images and texts on display at a new exhibition at London’s Jewish Museum. Entitled “Jews, Money, Myth,” the exhibition, on till July 7, examines both the role that money has played in Jewish life as well as the ways in which the associations — mostly negative — between Jews and money and profit have developed over the centuries.

The exhibition is particularly timely. Concerns around anti-Semitism have risen in the U.K. as they have across much of the rest of the world. While the Labour Party has faced allegations that it has not been tough enough on anti-Semitism within its ranks, the Jewish charity Community Security Trust reported a record number of anti-Semitic incidents last year. It is striking that even in Camden, a diverse London neighbourhood, entry into the museum is subject to security checks.

Even as major political parties have attempted to crack down on anti-Semitic rhetoric, others have got away with sharply divisive language. In 2017, the former head of the U.K. Independence Party (UKIP) Nigel Farage faced considerable criticism over remarks on LBC radio about how a “Jewish lobby” in the U.S. was “very powerful”. He is yet to apologise.

There are also concerns on the other side of the political spectrum, which prompted Momentum — the grass-roots left-wing organisation that is highly supportive of Jeremy Corbyn — to release an online video earlier this year, exploding myths around Jews and money. “Anti-Semitism casts Jews as powerful overlords, conspiring and manipulating behind the scenes,” warns Michael Walker in the video.

In this context, the exhibition is particularly striking and powerful, drawing both on objects involved in Jewish rituals, art, literature, and other objects of life such as board games. It also has some newly created videos to explore and build up an understanding of how the tropes around Jews and money have come to be built up — as well as the reality. “Throughout history, there have been both rich and poor Jews. The exhibition shows how Jewish wealth and poverty have been created by circumstances as well as the activity and acumen of Jews themselves — rather than ‘Jewishness’ itself,” says a note on the exhibition.

There are ancient Judean coins, ceremonial objects involved in charitable giving and, in more modern times, the paperwork of efforts made by Jewish communities in the U.K., during and before the Second World War to bring Jewish refugees to Britain. Chillingly — particularly in the context of the heated discussion on immigration and refugees under way across much of the West — there is a reminder of the difficulties that Jewish refugees faced coming to the U.K. even at that time: to seek refuge, they needed to prove they were able to finance themselves privately.

There are literary explorations of the stereotypes built up around Jews and money — from Shakespearean characters such as Shylock and Charles Dickens’s Fagin, to literature such as the Nazi propaganda book The Poisonous Mushroom.

There are also exhibits such as Rembrandt’s “Judas Returning the Thirty Pieces of Silver,” rather sympathetically picturing the biblical figure down on his knees begging for forgiveness from a group of priests as he attempts to return the thirty pieces of silver he was said to have betrayed Christ for. That story, the exhibition notes, has been key to propelling anti-Jewish stereotypes till this day.

Given the weight of the matter, it is perhaps unsurprising that some of the material resorts to black humour and satire, such as a video by U.S.-based artist Doug Fishbone. At one point, he notes the extent to which Indians in the West are now out-earning Jews there, leading British politician and author Lord Archer to declare, back in 2008, that Indians were the new Jews. “Maybe they will be accused of being the puppet masters behind the throne too?” asks Mr. Fishbone in his video.

The international community does have a role in diffusing tension in Kashmir and an India-Pakistan dialogue could help arrive at a solution akin to the Good Friday Agreement in Northern Ireland, which allows a level of free exchange on both sides of the border, opined strategic experts in London over the Kashmir crisis on Thursday. […]

North Korea continued to ramp up its weapons demonstrations by firing two presumed short-range ballistic missiles into the sea on Tuesday while lashing out at the United States and South Korea for continuing military exercises, which the North says could derail fragile nuclear diplomacy. North Korea’s fourth round of weapons launches in less than two […]

The U.S. President said that the huge number of positive cases is due to the massive testing efforts undertaken by his administration, more extensive than any other country Source: thehindu.com Related