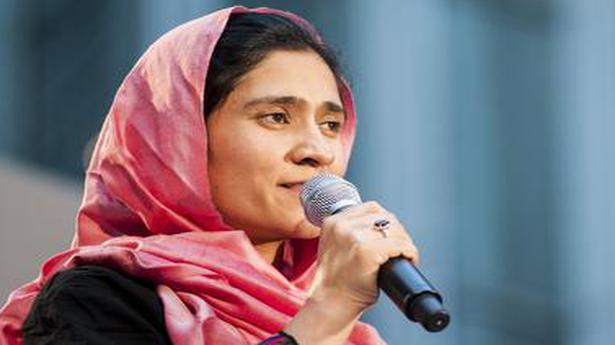 In a historic first, Forbes magazine featured three young Afghan women social entrepreneurs in their much-talked about ‘30 Under 30’ list for Asia. A total of four Afghans made it to the prestigious list, including the three women — Tamana Asey, 26, director of the Afghanistan Forensic Science Organization (AFSO); Shabana Basij-Rasikh, 29, founder of the School of Leadership, Afghanistan (SOLA); and Freshta Karim, 27, founder of Charmaghz, a mobile library in Kabul.

“Being named to the ‘30 Under 30’ list was an honour, but being named to it in the company of Freshta Karim and Tamana Asey was a joy,” said Ms. Basij-Rasikh, in picture, who as a teenager built SOLA, a boarding school for Afghan girls. Ms. Basij-Rasikh’s own struggles as she, disguised as a boy, tried to seek education under the Taliban regime led to her decision to found a school that provides quality education for girls along with extra-curricular experiences and skills training.

“There are as many as three million girls out of school in Afghanistan, and the illiteracy rate for Afghan teenage girls is 63%. Those two statistics alone speak volumes about why I do what I do. When you educate a girl, you change the world — I know this is true because I’ve lived it in my own life,” she said.

With much of the same sentiment, Ms. Karim created Charmaghz to fill a void in the education system in Afghanistan by making libraries more accessible to all communities of Kabul. Her mobile library, launched last year, and expanded this year, has gained tremendous following among children, who wait for the ‘Charmaghz bus’ to arrive in their areas. The mobile library provides not only books, but also conducts readings, group discussions, poetry recitations and board games.

Ms. Basij-Rasikh saw these nominations as something long due. “There are so many more Afghan women who you’ll never see and whose names you’ll never know who believe, just like we do, that an educated girl is incalculably valuable to her family, her nation, and her world,” she said.

For Ms. Asey, who is a trained medical doctor, making it to the Forbes list provides a much-needed push for her campaign against the practice of ‘virginity-testing’ — an invasive and entirely unscientific method to verify a woman’s virginity, where it is tested whether her hymen is intact, a social and even legal requirement for unmarried women. “I believe one of the worst forms of torture and violence women undergo is ‘virginity-testing’. It threatens human security and inherent rights of the women,” she said, adding that she became motivated to pursue this cause after witnessing first-hand the physical and psychological trauma caused to women by this practice.

Ms. Asey’s relentless campaign led to a ban on the practice in 2016. However, it continues to be widely practised across the country, and failing such a test could lead to imprisonment. It is this factor that motivates Ms. Asey to continue her work despite mounting threats. “I have faced criticism in my home country but international support (like the Forbes nomination) is just more inspiring. It pushes us to go further and continue this work till [‘virginity-testing’] is banned legally and culturally,” she added.

The inclusion of these women in the Forbes list comes at a crucial time when the U.S. is attempting to negotiate peace with the Taliban. Afghan women, though concerned about the return of the Taliban, remain undeterred.

“Every one of us — men and women — are looking forward to sustainable peace. But we, as women, have our concerns and red lines. Peace [will be] welcomed by us when our values and achievements of the last two decades aren’t threatened,” Ms. Asey said, urging the international community to ensure that women’s rights are protected.

Ms. Basij-Rasikh further pointed out that the recent momentum received by peace talks has, in fact, helped draw attention to progress made by Afghan women. “Peace talks have highlighted the tremendous work that so many Afghan women have been doing, and continue to do. Women are campaigning to focus attention on the role of women in not just the peace process but also in Afghan society at large,” she said.

Ruchi Kumar is a freelance journalist based in Kabul

Japanese Prime Minister Shinzo Abe said on Monday that South Korea was its “most important neighbour” and that the two shared basic values, taking a conciliatory tone towards the country that has been locked in a bitter row with Tokyo for over a year. The comment comes after South Korean President Moon Jae-in last week […]

Pakistan on Friday opened its borders with its all-weather ally China for a day to accept Chinese medical supplies to fight the growing coronavirus outbreak in the country which has infected 1,235 people and claimed nine lives, officials said. China on Thursday asked Pakistan to open the border between the two countries for one day […]