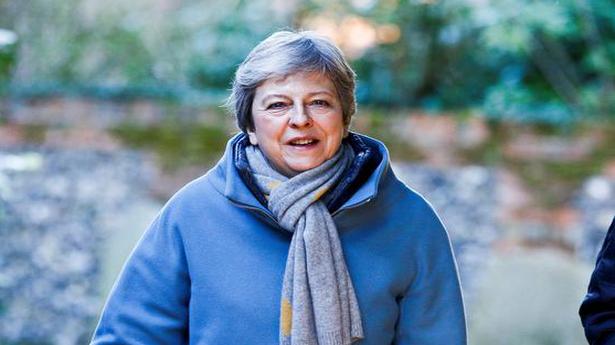 British Prime Minister Theresa May on Sunday called on her rebellious MPs to do the patriotic thing to strike an honourable compromise over Brexit as she prepares to table her twice-defeated withdrawal agreement to another Parliament vote next week, hoping it would prove third time lucky for her.

Her latest plea came at the end of a frenetic week in Westminster as MPs voted on a flurry of motions, not just ruling out leaving the European Union (EU) with May’s deal but also without any deal in place at all, calling for a delay to the March 29 Brexit Day deadline.

Ms. May warned deeply divided Brexiteers within her own party and across the House of Commons that failure to once again support her deal, which was defeated by a resounding 230-vote margin in January and a smaller 149-vote margin last week, would mean the UK may not leave the EU for many months and may even rule out Brexit altogether.

She urged MPs to get behind her improved deal before a European Council summit in Brussels next week, with legally binding changes to the controversial Irish backstop clause addressing concerns that the UK could be tied to EU rules indefinitely.

If Parliament can find a way to back the Brexit deal before European Council, the UK will leave the EU this spring, without having to take part in the European elections If it cannot, we will not leave the EU for many months, if ever, she writes in ‘The Sunday Telegraph’

As things stand, Ms. May is hoping to return to Brussels with a Parliament-backed deal to seek a short delay until June 30 to complete procedures.

It is for the EU to decide the terms and conditions of any extension because legally the UK is still due to leave the economic bloc on March 29.

With European Parliament elections scheduled to take place towards the end of May, if the UK Parliament remains deadlocked over an exit strategy, the EU is expected to agree to only a lengthy delay to the Article 50 Brexit mechanism.

Such a move would necessitate Britain’s participation in the European Parliament polls.

“The idea of the British people going to the polls to elect MEPs [Members of European Parliament] three years after voting to leave the EU hardly bears thinking about. There could be no more potent symbol of Parliament’s collective political failure,” Ms. May warned.

Against this backdrop, she is set for a last-ditch attempt at getting her deal through the Commons as she seeks to change the mind of 75 MPs to vote differently from last week and win the required majority.

There are some signs that hard-Brexiteers might be ready to change their minds over fears of a lengthy delay or no Brexit at all, with a letter signed by Tory MPs from Leave-backing constituencies, including former Brexit Secretary David Davis, urging colleagues to back the deal.

The Northern Irish Democratic Unionist Party (DUP), which has voted against the agreement twice already, also held out some hope, saying that while there were “still issues to be discussed”, it remained in talks with the government.

The 10 votes provided by the DUP, which provides Ms. May’s Conservative Party government with its crucial Commons majority, are key to the British Prime Minister proving third time lucky with her withdrawal agreement.

Meanwhile, Opposition Labour leader Jeremy Corbyn has written to MPs across the Commons inviting them for talks to find a cross-party compromise over Brexit.

In his letter, he called for urgent meetings to find a “solution that ends the needless uncertainty and worry” caused by May’s “failed” Brexit negotiations.

Meanwhile, a latest opinion poll conducted by Opinium for the ‘Observer’ newspaper exposed the lingering divisions across the country over Brexit, with an equal set of people (43 per cent each) found backing a second referendum and leaving the EU without a deal by March 29.

The poll found that if a second referendum were held with the options of accepting Theresa May’s deal or remaining in the EU on the ballot paper, 46 per cent said they would back remain, against 36 per cent who would vote to leave on the terms of the British Prime Minister’s proposal.

The figures will encourage remain supporters ahead of a mass demonstration and march in favour of a second referendum scheduled to take place in London next Saturday.

The U.S. Homeland Security Department issued new regulations on Friday limiting visas for Chinese journalists to a maximum 90-day stay, with the possibility to request an extension. Source: thehindu.com Related