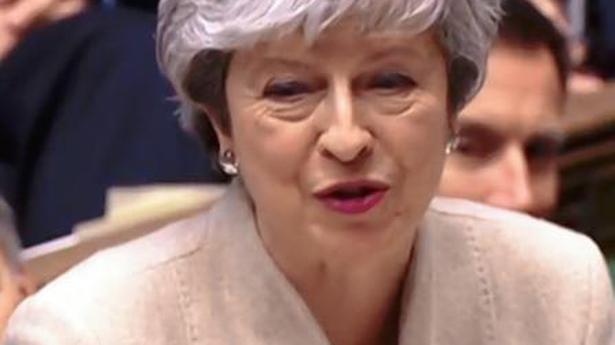 One of the striking things about Britain’s road to Brexit has been that the further down the line things have got, the greater the number of possible outcomes.

Friday’s developments were no exception. The government’s attempt to get the withdrawal treaty — without the political declaration on future relations — failed, as 344 MPs opposed it and 286 voted for it, leaving its strategy in tatters.

The government has sought to put a positive spin on it: emphasising the closing margin compared to the previous votes (58 as opposed to 149 on March 12, and 230 in January). However, unlike in previous votes, Ms. May had earlier this week played her trump card — a pledge to step down and make way for a successor ahead of the next phase of negotiations.

While it convinced some hardline Brexiteers, including Boris Johnson and Jacob Rees-Mogg, it wasn’t enough for others such as Indian-origin MPs Priti Patel and Suella Braverman, who voted against the deal, insisting it undermined Britain’s sovereignty.

The Democratic Unionist Party of Northern Ireland is also not for turning. Earlier this week, rather strikingly, DUP deputy leader Nigel Dodds told the BBC that if they had to choose between the risk of being locked in the backstop that potentially threatened the unity of the U.K. or no-Brexit at all, they would go for the latter.

The step of separating the legal text of the withdrawal treaty from the political declaration had been partly designed to appeal to wavering Labour MPs, even as the party’s leadership warned that agreeing to it would amount to giving the green light to the “blindest of blind Brexits.

This would be all the more so because of Ms. May’s pledge to stand down, and because there are many Conservative politicians — with very different views of the road ahead — who want to take her place. They range from Brexiteers such as Boris Johsnon and Dominic Raab to Sajid Javid (the first South Asian Home Secretary who has adopted a position firmly between the two sides) and Amber Rudd, who had campaigned to Remain and supports a softer Brexit.

Under an extension granted to the U.K. by the EU earlier, Britain had till 11 pm on Friday to pass the withdrawal agreement if it wanted an extension till May 22. Without this, it has time until April 12 to come up with alternatives, but getting an extension beyond that is not guaranteed.

However, despite signs of frustration, senior EU leaders have been appealing to member states not to give up on Britain. Donald Tusk, the European Council President, has called on the EU not to betray the 6 million who signed a petition calling on the government to revoke Brexit, or the near 1 million who marched through London calling for a second referendum.

In addition, Ms. May herself has finally begun to make clear that she’s eager to avoid a no-deal scenario, even as her deal has been rejected. Speaking after the vote on Friday, she told MPs that the government would press for an “orderly Brexit” that respected the referendum result. That means almost certainly that Britain will want to push for a longer extension that would require the country to take part in European parliamentary elections on May 23.

However, to convince EU leaders that Britain should be given more time, Britain will have to come up with a game plan. The difficulty of doing this became abundantly clear last week, as MPs rejected all eight options put forward to them in an indicative voting process.

Yet, the indicative votes’ architects do believe that it does offer a route ahead and are hoping to put a shorter list of the options that commanded the most support to MPs to another indicative vote on Monday. Among those that could make it to the list are making any deal subject to a confirmatory public vote (a second referendum) and keeping Britain in the customs union.

One thing the government could then attempt is putting Ms. May’s deal in a final run-off with one of those options. But there’s still a risk that both could fail to command a majority.

Acknowledging the impasse, Ms. May has also hinted a general election might be the only way of moving forward. “I fear we are reaching the limits of this process in this House.” However, this is also not without risks: current polls put the parties almost neck and neck (35% Conservative, 31% Labour, according to a YouGov poll published on March 17).

But whatever happens, action will need to be swift. The anger on the streets was palpable on Parliament Square and beyond as some MPs and journalists faced heavy intimidation and accusations of treachery from some of the Brexit supporters who gathered there.

Iran-backed militiamen withdrew from the U.S. Embassy compound in Baghdad on Wednesday after two days of clashes with American security forces, but U.S.-Iran tensions remain high and could spill over into further violence. The withdrawal followed calls from the government and senior militia leaders. It ended a two-day crisis marked by the breach of the […]