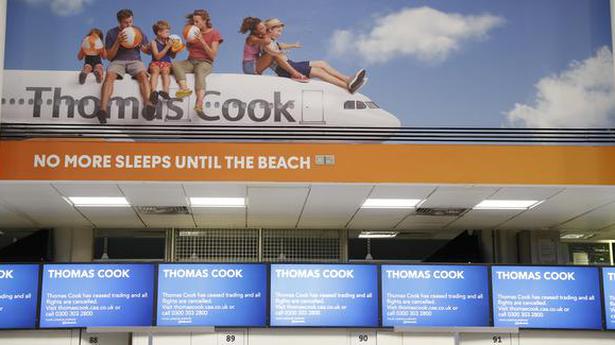 The 178-year-old debt-plagued group, which had struggled against fierce online competition for some time and blamed Brexit uncertainty for a recent drop in bookings, failed to secure 200 million pounds ($250 million, 227 million euros) from private investors and collapsed in the early hours.

Monday’s bankruptcy, which followed a lengthy period of chronic financial turmoil after a disastrous 2007 merger deal, left some 600,000 tourists stranded worldwide according to Thomas Cook, while its 22,000 staff are now out of a job.

The British government launched emergency plans to bring some 1,50,000 U.K. holidaymakers back home from destinations including Bulgaria, Cuba, Turkey and the United States.

Thomas Cook said in a statement that “despite considerable efforts”, it was unable to reach an agreement between the company’s stakeholders and proposed new money providers.

“The company’s board has therefore concluded that it had no choice but to take steps to enter into compulsory liquidation with immediate effect,” it added.

The long-troubled group has also been blighted by enormous costs arising from its disastrous 2007 merger with MyTravel, a deal which left it plagued with huge levels of debt.

The U.K. government said on September 23 it had hired planes to fly home British tourists, in a mass repatriation plan codenamed ‘Operation Matterhorn’ which began immediately.

“All customers currently abroad with Thomas Cook who are booked to return to the U.K. over the next two weeks will be brought home as close as possible to their booked return date,” the government said.

Both a tour operator and an airline, the travel giant’s key destinations were in Southern Europe and the Mediterranean but it offered also holidays in Asia, North Africa and the Caribbean.

“It is a matter of profound regret to me and the rest of the board that we were not successful,” said Thomas Cook chief executive Peter Fankhauser.

“This marks a deeply sad day for the company,” he added in the statement.

As well as grounding its planes, Thomas Cook has been forced to shut travel agencies, leaving the group’s 22,000 global employees — 9,000 of whom are in Britain — out of a job.

Chinese peer Fosun, which was already the biggest shareholder in Thomas Cook, had agreed last month to inject 450 million pounds into the business as part of an initial 900 million pounds rescue package.

In return, the Hong Kong-listed conglomerate was to acquire a 75% stake in Thomas Cook’s tour operating division and 25% of its airline unit.

“Fosun is disappointed that Thomas Cook Group has not been able to find a viable solution for its proposed recapitalisation with other affiliates, core lending banks, senior noteholders and additional involved parties,” the Chinese group said in a statement to AFP on September 23.

It soon began arranging foreign trips, being the first operator to take British travellers on escorted visits to Europe in 1855, followed soon after by destinations further afield.

Thomas Cook grew into a huge operation but fell into massive debt despite recent annual turnover of 10 billion pounds from transporting about 20 million customers worldwide.

The tour operator’s demise caps a dramatic fall from grace for a company which was ejected from London’s prestigious FTSE 100 shares index in 2010 — and from the second-tier FTSE 250 last year. Its shares are worthless and now suspended.

“A rescue package would likely have amounted to little more than delaying the inevitable and simply throwing good money after bad,” said XTB analyst David Cheetham.

Heavily armed gunmen waged an all-out battle against Mexican security forces on Thursday as soldiers arrested — then reportedly released — a son of jailed drug kingpin Joaquin ‘El Chapo’ Guzman in his home state, Sinaloa. Security Minister Alfonso Durazo said soldiers on a routine afternoon patrol came under fire from a residence in the […]

Newly released data from a Japanese research institute appears to back the government’s case that its quarantine strategy for the Diamond Princess cruise ship was successful in stemming contagion of COVID-19 among passengers. Japan has been criticised for its handling of the quarantine, as more than 620 people on board have been infected with the […]