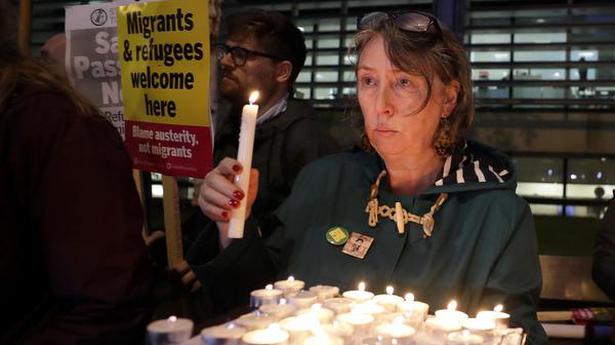 The police investigating the deaths of 39 people in a truck near London said they had arrested three more suspects on Friday on suspicion of human trafficking amid signs that some of the dead may be Vietnamese.

As forensic experts began the process of identifying the victims, the Vietnamese embassy in London said families from the southeast Asian country had got in touch about missing relatives. There were growing concerns at least 10 of the victims could have been from Vietnam.

Hoa Nghiem from Human Rights Space, a civic network based in Vietnam, said that Pham Thi Tra My, 26, had sent a text message to her mother saying she could not breathe at about the time the truck container was en route from Belgium to Britain.

“Im sorry, mum and dad. My path abroad was not a success. I love you both so much. I cant breathe. I’m from Nghen Town, Can Loc District, Ha Tinh, Vietnam … I am sorry, Mom,” the message said, according to Ms. Hoa who said it had come from Tra My’s family.

She said Tra My had gone to China and was planning to reach England via France and that the organisation was getting more alerts about possible Vietnamese victims in the refrigerated trunk, which was found on Wednesday.

The police have said they believe the dead were Chinese but Beijing said the nationalities had not yet been confirmed. Chinese and Vietnamese officials are now both working closely with the British police, their respective embassies said.

“We owe it to those who have died to get this investigation right and speculation is not helpful,” Essex Police’s Deputy Chief Constable Pippa Mills told reporters. “It may in fact hinder our investigation and its progress.”

On Friday, the police also arrested a man and woman, both aged 38, in Warrington, England, and a 48-year-old man from Northern Ireland at London’s Stansted Airport. They are suspected of conspiracy to traffic people and manslaughter.

Democratic Rep. Rashida Tlaib said Friday she would not visit her grandmother in the occupied West Bank, despite being granted an Israeli permit on humanitarian grounds, saying Israel’s “oppressive” conditions aimed to humiliate her. Israel barred Tlaib and another Democrat, Rep. Ilhan Omar, from visiting Jerusalem and the West Bank over their support for the […]

Pakistan President Arif Alvi summoned a joint session of the Parliament on Tuesday, hours after the Indian government on Monday abolished Article 370 of the Constitution which granted special status to Jammu and Kashmir, according to a media report. The joint sitting, to be held at 11 am (local time) on Tuesday, will review the […]