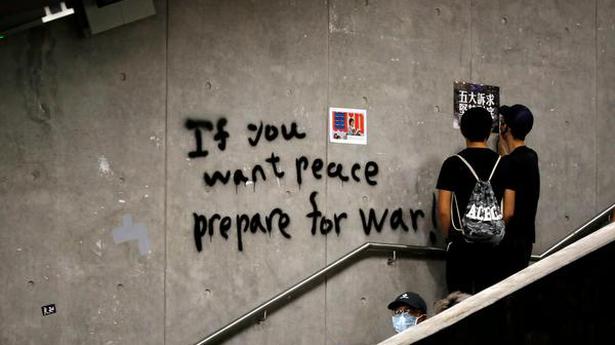 “I think it’d be very hard to deal if they do violence, I mean, if it’s another Tiananmen Square,” Trump told reporters in New Jersey. “I think it’s a very hard thing to do if there’s violence.”

The months-long trade dispute between the U.S. and China has been blamed for setting world financial markets on edge amid signs of a possible global economic slowdown. Trump’s comments came as Washington and Beijing look to revive pivotal talks aimed at ending their trade war.

Phone calls between both countries’ deputies are planned for the next 10 days, and if those are successful, negotiations could resume, Trump’s chief economic advisor Larry Kudlow said on August 18.

Hong Kong has meanwhile been dealing with more than two months of protests and on August 18 saw a crowd that organizers said numbered some 1.7 million people march peacefully in the city despite rising unrest and stark warnings from Beijing. Chinese state media has run images of military personnel and armored personnel carriers in Shenzhen, across the border from the semi-autonomous city.

In the 1989 crackdown in Beijing’s Tiananmen Square, China deployed tanks to end student-led protests, resulting in an estimated death toll of hundreds if not thousands.

If such a situation was repeated in Hong Kong, “I think there’d be… tremendous political sentiment not to do something,” Trump said, referring to the trade negotiations with China.

Under a deal signed with Britain, China agreed to allow Hong Kong to keep its unique freedoms when the former crown colony was handed back in 1997. But many Hong Kongers feel those freedoms are being chipped away, especially since China’s hardline president Xi Jinping came to power.

Trump stopped short of endorsing the protesters, saying, “I’d love to see it worked out in a humane fashion,” and calling on Xi to negotiate with the dissidents.

Last week, China’s state-run daily The Global Times said there “won’t be a repeat” of Tiananmen Square in a rare reference to the crackdown. Analysts say any intervention in Hong Kong by Chinese security forces would be a disaster for China’s reputation and economy.

The weeks of demonstrations have plunged the financial hub into crisis, with images of masked, black-clad protesters engulfed by tear gas during street battles against riot police stunning a city once renowned for its stability.

The unrest was sparked by widespread opposition to a plan for allowing extraditions to the Chinese mainland, but has since morphed into a broader call for democratic rights in the semi-autonomous city.

The August 18 march, billed as a return to the peaceful origins of the leaderless protest movement, was one of the largest rallies since the protests began about three months ago, according to organizers the Civil Human Rights Front.

Pakistan wants peace with India and they should focus on health and education, the Pakistan President said on Saturday during a parade to show off its military might following a tense standoff between the nuclear-armed neighbours. Conflict between the rivals erupted last month following a suicide bomb attack claimed by a Pakistan-based militant group in […]

Will exercise all possible options to counter ‘illegal’ steps: Pakistan on Article 370

Condemning the government’s move on Article 370, which gave special status to Jammu and Kashmir, a statement from Pakistan’s foreign office said that it will exercise all possible options to counter the ‘illegal’ steps. Pakistan said that it strongly condemned and rejected the announcements made today by the Indian Government regarding Jammu and Kashmir. Calling […]

No intent to exclude India from Afghan diplomacy: China

China on Monday sought to reassure India that it does not intend to “exclude” New Delhi from international diplomacy on Afghanistan, following last week’s quadrilateral talks in Beijing among China, Russia, the U.S. and Pakistan. Fresh from his visit to Qatar where he held talks with the Taliban and Afghan government officials, U.S. special envoy […]