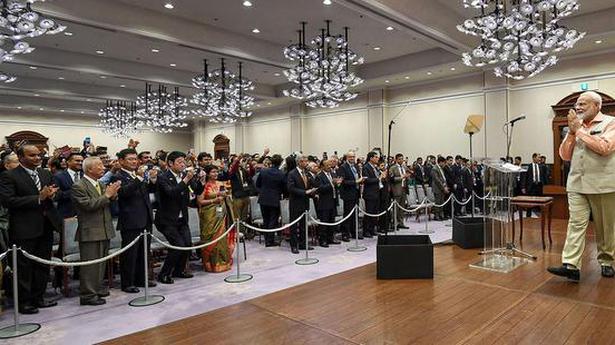 Prime Minister Narendra Modi said on Thursday that ties between India and Japan had become stronger from the time the two countries cooperated to make a car to coming together to manufacture a bullet train.

Mr. Modi said the bilateral ties are going to become more robust as India aimed to become a $5-trillion economy in the next five years.

“Today, there is no such part of India where Japan’s projects or investments have not left its mark. Similarly, talent and manpower of India are contributing to strengthen Japan,” he told the enthusiastic Indian diaspora who gave a rousing welcome to the Prime Minister.

India is planning to run its first bullet train between Mumbai and Ahmedabad with Japan’s help.

Mr. Modi thanked the Indian diaspora for being part of the world’s largest democratic process, which saw the participation of 61 crore voters. “When it comes to India’s relationship with the world, Japan has an important place in it. This relationship is dated back to centuries. There is a sense of belonging, goodwill and respect for each other’s culture and civilisation,” he said.

“Almost two decades ago, Prime Minister Atal Bihari Vajpayee and the then Japanese premier, Yoshiro Mori, together made our relationship as a global partnership. After becoming Prime Minister in 2014, I got a chance to strengthen our friendship with my dear friend Prime Minister Shinzo Abe. This relationship will become stronger in New India,” he said.

Thanking the Indian diaspora for playing a vital role in the recently concluded Indian elections, in which he was voted back to power with a stronger mandate, the Prime Minister said while several Indians from Japan worked on the field, many used social media to spread the message of the democratic process.

Twitter said on Friday that the account of chief executive Jack Dorsey had been “compromised” after a series of erratic and offensive messages were posted. The tweets containing racial slurs and suggestions about a bomb showed up on the @jack account of the founder of the short messaging service before being deleted. Some of the […]

At least 19 children were wounded when a primary school was hit by shelling in Myanmar’s Rakhine state, a lawmaker and a military spokesman said on Thursday. Clashes between government troops and ethnic insurgents have intensified in Rakhine, from where tens of thousands of people have been displaced since clashes began in December 2018, bringing […]