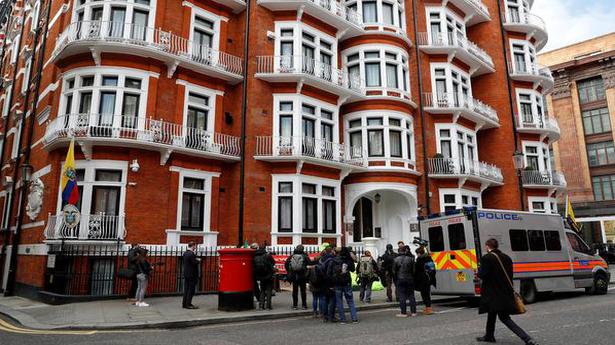 WikiLeaks’ founder Julian Assange was arrested on Thursday after being holed up in Ecuador’s embassy in London since 2012.

July to October 2010: WikiLeaks releases about 470,000 classified military documents concerning American diplomacy and the wars in Afghanistan and Iraq. It later releases a further tranche of more than 250,000 classified US diplomatic cables.

December 2010: He turns himself in to police in London and is placed in custody pending a ruling on the Swedish extradition request. He is later released on bail and calls the Swedish allegations a smear campaign.

February 2011: A British judge rules that Mr. Assange can be extradited to Sweden. Mr. Assange fears Sweden will hand him over to US authorities who could prosecute him for publishing the documents.

June 2012: He takes refuge in the Ecuadoran embassy in London. He requests, and is later granted, political asylum.

February 2016: The UN Working Group on Arbitrary Detention says Mr. Assange has been “arbitrarily detained” and should be able to claim compensation from Britain and Sweden. Britain and Sweden rebuff the non-binding ruling.

January 2017: WikiLeaks says Mr. Assange could travel to the United States to face investigation if his rights are “guaranteed”. It comes after one of the site’s main sources of leaked documents, military intelligence analyst Chelsea Manning, is given clemency.

May 2017: Swedish prosecutors say they have closed their seven-year sex assault investigation into Assange. British police say they would still arrest him if he leaves the embassy as he breached the terms of his bail in 2012.

December 2017: Quito grants Mr. Assange Ecuadoran nationality. Britain refuses Ecuador’s request to accord Mr. Assange diplomatic status, which would allow him to leave the embassy without being arrested.

February 2018: He loses a bid to have his British arrest warrant cancelled on health grounds.

March 2018: Ecuador cuts off Mr. Assange’s communications alleging he broke an agreement on interfering in other countries’ affairs.

October 2018: It imposes new conditions on Mr. Assange in the embassy, warning that breaching them could lead to the “end of asylum”.

November 2018: US prosecutors inadvertently disclose the existence of a sealed indictment against Mr. Assange.

April 2019: Ecuador’s President Lenin Moreno says Assange has “repeatedly violated” the conditions of his asylum at the embassy. An independent rights expert was due to visit Mr. Assange at the embassy on April 25 to assess whether the violation allegations merit investigation.

April 11: British police say they have arrested Mr. Assange at the embassy after his asylum was withdrawn.

Hong Kong police on Monday said they were forced to fire water cannon and a warning shot to fend off “extremely violent” demonstrators, as months of pro-democracy protests veer deeper into violence. Sunday’s clashes in the suburb of Tsuen Wan were some of the worst in twelve weeks of political unrest tremoring through the city. […]

Five nations whose citizens died when an airliner was shot down by Iran last week will meet in London on Thursday to discuss possible legal action, Ukraine’s Foreign Minister said. Speaking on the sidelines of an official visit to Singapore on Monday, Vadym Prystaiko said the countries would also discuss compensation and the investigation into […]

The world needs to “redefine” its conversations on globalisation to include social and humanitarian issues like terrorism, climate change and pandemics along with financial and economic discussions, said Prime Minister Narendra Modi, speaking at a video-conference of leaders of the world’s top twenty economies, the G-20, hosted by the Saudi King Salman bin Abdulaziz Al […]