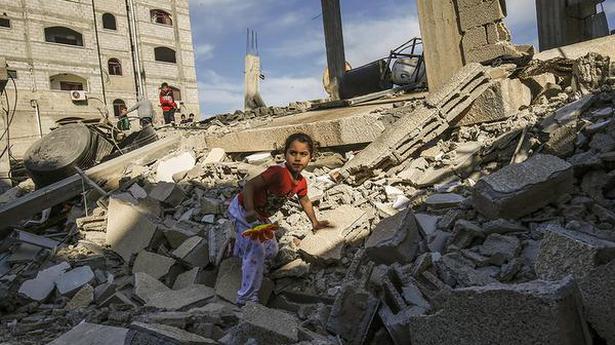 Rockets from Gaza killed three people in an Israeli city while five Palestinian militants died on Sunday in cross-border fighting.

Israeli Prime Minister Benjamin Netanyahu said he ordered the military to continue “massive strikes” against Gaza’s ruling Hamas group and Islamic Jihad, in the most serious border clashes since a spate of fighting in November.

Israel’s military said more than 450 rockets, many intercepted by its Iron Dome anti-missile system, have been fired at southern Israeli cities and villages since Friday, and it attacked some 220 targets belonging to Gaza militant groups.

A rocket that hit a house in Ashkelon killed a 58-year-old Israeli man, police said. He was the first such Israeli civilian fatality since the seven-week-long Gaza war in 2014. Separate strikes on the southern Israeli city killed two men, a local hospital official said. In Gaza, at least four Palestinian gunmen were killed in Israeli strikes, health officials said.

In a separate strike it described as a targeted attack, Israel’s military killed Hamed Ahmed Al-Khodary, a Hamas commander. The military said he was responsible for transferring funds from Iran to armed factions in Gaza. The air strike on his car was the first such killing of a top militant since the war five years ago. Israel had suspended such attacks in a bid to lower tensions.

The sounds of sirens and explosions reverberated on both sides of the frontier, fraying nerves and keeping schools closed.

The latest round of violence began two days ago when an Islamic Jihad sniper fired at Israeli troops, wounding two soldiers, according to the Israeli military. Islamic Jihad accused Israel of delaying implementation of previous understandings brokered by Egypt aimed at ending violence and easing blockaded Gaza’s economic hardship.

This time, Israeli strategic affairs analysts said, both Islamic Jihad and Hamas militants appeared to believe that they had some leverage to press for concessions from Israel, where independence day celebrations begin on Wednesday.

Israel is also hosting Eurovision Song Contest in Rehovot, southeast of Tel Aviv, in two weeks, and sirens sounded there on Sunday.

In a statement announcing Israel would press on with its attacks, Mr. Netanyahu, who doubles as Defence Minister, also ordered forces around the Gaza Strip to be “stepped up with tanks, artillery and infantry”.

For residents in Gaza, the escalation comes a day before the Muslim holy month of Ramzan begins in the territory on Monday. Since Friday, 13 Palestinians, of whom five were civilians, have been killed in Gaza.

As part of its relief operations in cyclone-hit Mozambique, the Indian Navy has rescued more than 192 people and provided assistance to 1,381 people in medical camps set up by it, a statement said. Cyclone Idai made landfall in East and Southern Africa around March 15 causing widespread destruction and loss of human lives in […]

Mike Bloomberg is out of the Democratic presidential race, but he’s not done trying to beat President Donald Trump. The billionaire businessman is funding an anti-Trump operation in six battleground states in an effort to oust the Republican president in November. Bloomberg will dip into his vast fortune to pay for field offices in Arizona, […]

India responds to Imran Khan’s UN speech: Indian citizens do not need anyone to speak on their behalf

Strongly hitting back at Pakistan Prime Minister Imran Khan’s rant at the UN General Assembly, India has said its citizens do not need anyone else to speak on their behalf and “least of all those who have built an industry of terrorism from the ideology of hate.” Khan delivered his maiden speech at the 74th […]