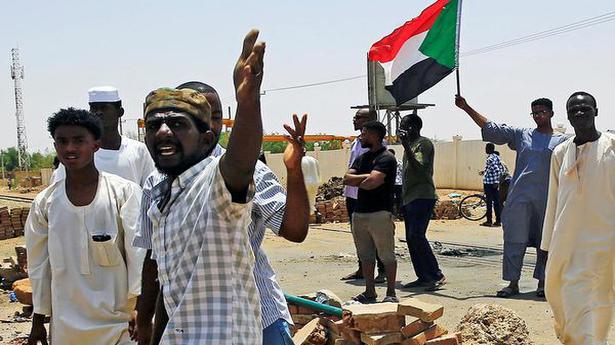 Gunfire crackled in Sudan’s capital on Wednesday as tensions remained high after a two-day crackdown that doctors close to the country’s protest movement said had left at least 60 people dead.

Despite mounting international concern at what demonstrators called a “bloody massacre”, a bid at the UN Security Council to condemn the killings was blocked by China with support from Russia.

Hospitals in Khartoum said they were struggling to cope with the number of wounded after security forces launched a deadly raid on Monday on a weeks-long sit-in outside army headquarters.

“The situation is very difficult. Most of the hospitals have taken in more casualties than they have capacity for,” a doctor who works at two hospitals in the city told AFP. “There’s a shortage of medical staff, a shortage of blood, and it’s difficult to do surgery because some operations can only be done in certain hospitals,” said the doctor, who asked not to be named.

Sudan’s military ousted veteran President Omar al-Bashir in April after months of protests against his authoritarian rule and had agreed a three-year transition period to a civilian administration.

But Army ruler General Abdel Fattah al-Burhan said following the crackdown that the plan had been ditched and an election would take place within nine months — a plan rejected by demonstrators.

Protest leaders called on their supporters to take part in “total civil disobedience” to topple the ruling military council.

On Wednesday, hundreds of residents of the north Khartoum blocked off streets with barricades made from stones, and waited by them in silence, a witness told AFP.

In the distance gunfire was heard. In the early morning, sporadic shooting was heard in the Khartoum 2 neighbourhood, an area where there are several embassies, an AFP reporter said.

The Central Committee of Sudanese Doctors, which is linked to the protesters, said the death toll had jumped to 60 with hundreds more wounded. An eight-year-old child was among the dead, it added.

The committee said it held “the militias of the (military) council… responsible for this massacre.”

The Rapid Support Forces, paramilitaries with origins in the 16-year-old war in the western region of Darfur, are thought to have been largely behind the crackdown.

Their commander is deputy chairman on the ruling military council.

The Sudanese Professionals Association , which spearheaded protests against Mr. Bashir, urged the global community “to isolate and stop dealing with the so-called military council”. It also called for an independent probe into the killings under international supervision.

The Transitional Military Council said it “regrets” the events, calling it a “clean-up operation” that went wrong.

The U.N. secretary general said Tuesday that the virus outbreak that began in China poses a very dangerous situation for the world, but is not out of control. Speaking in an interview with The Associated Press, Antonio Guterres said that the risks are enormous and we need to be prepared worldwide for that. Guterres said […]

No decision yet on airspace closure to India, says Pakistan Foreign Minister Qureshi

Pakistan Foreign Minister Shah Mehmood Qureshi has said that no decision has been taken yet to close the airspace to India, underlining that any such step would be taken after looking into each and every aspect of the move through consultation. Mr. Qureshi dismissed as speculative reports suggesting that the airspace was being shut for […]

U.S. President Donald Trump has directed his administration to charge fees for asylum claims and handle cases within 180 days, the White House said in a statement on Monday. The announcement came as Mr. Trump blasted what he described,on Twitter, as the United States’ “weak, ineffective and dangerous” immigration laws . The memo outlined other […]