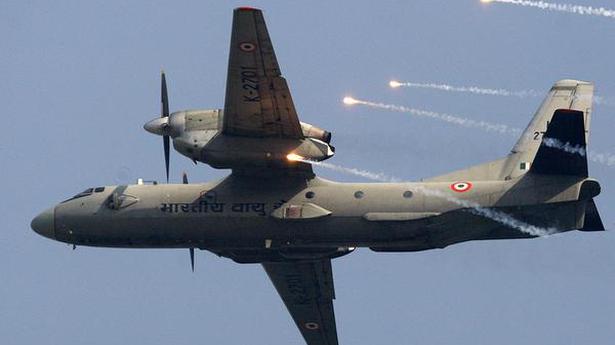 An An-32 transport aircraft of the Indian Air Force (IAF), with eight crew and five passengers onboard, went missing over Arunachal Pradesh on Monday. It got airborne from Jorhat in Assam at 1225 hours for the Mechuka Advanced Landing Ground in the State.

Three people have filed cases against an Assam border police inquiry officer, who had used their signatures as witnesses in the case that eventually made ex-Serviceman and Kargil war veteran Mohammed Sanaullah a foreigner.

Facing pressure from Tamil Nadu against the draft National Education Policy’s recommendation for mandatory Hindi teaching in all the States, the Union government has issued a modified draft leaving out the controversial clause.

Indian Air Force helicopters on June 3 spotted the bodies of five of the eight mountaineers who went missing on their way to the Nanda Devi East peak in Uttarakhand. The eight-member team consisting of climbers from the U.K., U.S. and Australia.

Mohammad Hafeez headlined a return to form for Pakistan’s batsmen at the Cricket World Cup, making 84 off 62 balls in the team’s 348-8 against ragged England on the world-record batting strip at Trent Bridge on Monday.

The Bombay High Court on Monday upheld the constitutional validity of a section in the Indian Penal Code that sentences repeat rape offenders to death penalty.

Also read | The Hindu Explains: What is Section 376E and how does it affect the Shakti Mills gang rape case?

The Appointments Committee of the Cabinet has approved the reappointment of Ajit Doval as National Security Advisor (NSA).

Rashid Abdulla, who led a 21-member group from this district that migrated to Afghanistan to fight for the Islamic State (IS), is believed to have been killed, according to a source who accessed a message from an IS-linked contact in that country.

Chief Minister Arvind Kejriwal on Monday announced that the Delhi government intended to subsidise travel aboard public transportation for female commuters in the Capital.

The Supreme Court on Monday granted three months time to the CBI to complete its probe, including into the murder aspect, in the Muzaffarpur shelter home case. Several girls were sexually and physically assaulted at an NGO-run shelter home in Muzaffarpur and the issue had come to light following a report by the Tata Institute of Social Sciences (TISS).

In the wake of a suspected case of Nipah virus infection at a private hospital in Kochi, a high-level committee has decided to strengthen preventive measures, even as confirmation is awaited from the National Institute of Virology (NIV) in Pune.

The Kerala Congress on Monday expelled its leader A.P. Abdullakutty from the party with immediate effect, days after he praised Prime Minister Narendra Modi for the BJP-led NDA’s massive victory in the just-concluded general election.

With border guards, clean-up crews and hospitals, Iraqi protesters have created a mini-state in Baghdad’s Tahrir Square, offering the kinds of services they say their government has failed to provide. “We’ve done more in two months than the state has done in 16 years,” said Haydar Chaker, a construction worker from Babylon province, south of […]