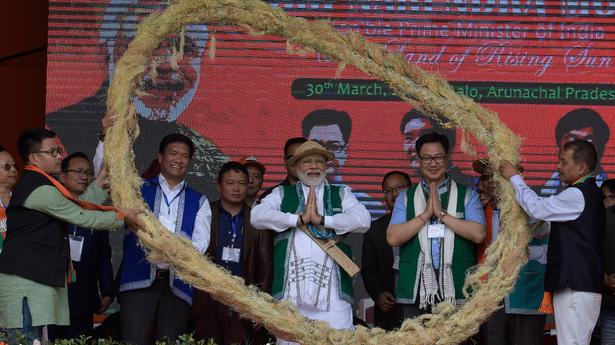 Prime Minister Narendra Modi on Saturday asked the people of Arunachal Pradesh to vote for a ‘chowkidar’ (watchman) who would provide security to the country even as he attacked Opposition parties, claiming they were “disheartened” by India’s growth and success.

The Kerala Women’s Commission on Saturday began an inquiry into the suspected dowry killing of a 27-year-old mother of two, by enforced starvation, at her husband’s house at Oyur in Kollam district last week.

Hardik Pandya once again provided the final flourish after yet another middle-order collapse as Mumbai Indians managed 176 for 7 against Kings XI Punjab in an Indian Premier League encounter here Saturday.

Former champion Kidambi Srikanth broke a 17-month long drought by reaching the finals of the $350,000 India Open after prevailing in a three-game thriller in the men’s singles competition in New Delhi on Saturday.

Shortly before Deputy Chief Minister and the All India Anna Dravida Munnetra Kazhagam (AIADMK) coordinator O. Panneerselvam began his campaign in the Dharmapuri Lok Sabha constituency on Saturday morning, The Hindu caught up with him.

The Enforcement Directorate has provisionally attached a Hotel Holiday Inn worth ₹120.20 crore in connection with an alleged money laundering case against lobbyist Deepak Talwar, his family members and related entities, said the agency on Friday.

Prime Minister Theresa May’s Brexit deal is all but dead, after lawmakers voted to reject it for a third time on Friday — the day Britain had long been scheduled to leave the European Union.

In episode 2 of The Hindu’s political speeches podcast, Deputy Editor B Kolappan speaks to Jayant Sriram about the DMK’s Lok Sabha campaign in Tamil Nadu and a battle that the party is facing on two fronts

BJP president Amit Shah on Friday filed his nomination in Gandhinagar where he is contesting the Lok Sabha poll, replacing the 91-year-old party patriarch L.K. Advani.

A Indian former Roman Catholic priest has been sentenced to six years in prison for sexually abusing a teenage girl in the U.S., according to a media report.

A senior Pakistani judge on Sunday denied being blackmailed into convicting ex-Prime Minister Nawaz Sharif for graft last year after the main opposition party showed a secretly taped video that appeared to show him saying he was threatened over the case. Nawaz Sharif’s Pakistan Muslim League-Nawaz (PML-N) party presented the video at a specially called […]