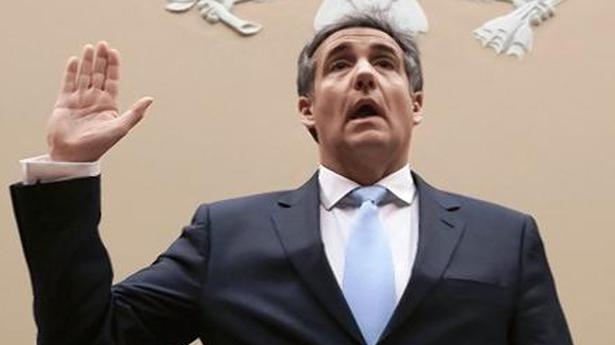 “Wow, just revealed that Michael Cohen wrote a ‘love letter to Trump’ manuscript for a new book that he was pushing,” Mr. Trump tweeted Friday. “Book is exact opposite of his fake testimony, which now is a lie!”

The President called on Congress to demand the transcript, given to publishers a short time ago and yet to go on sale. “Michael Cohen’s book manuscript shows that he committed perjury on a scale not seen before,” Mr. Trump added.

Mr. Cohen assailed his ex-boss as “a racist… a conman… a cheat” in testimony on Wednesday to the House Oversight Committee.

In a book proposal Mr. Cohen sent to publishers in early 2018 — before he was sentenced to three years in prison, partly for crimes related to his work for Mr. Trump — the attorney promised a glowing picture of the real estate billionaire.

The proposal was pulled back after FBI agents raided Mr. Cohen’s home and offices in April 2018 in an investigation probing the attorney’s taxes and hush payments he arranged for women who claimed affairs with the President.

“Some time in early 2018, Mr. Cohen was offered a substantial advance for a proposal regarding a book on understanding Donald Trump,” Mr. Cohen’s lawyer Lanny Davis said. “Mr. Cohen ultimately elected not to proceed.”

In the months after the raids, Mr. Cohen went from being a close ally of Mr. Trump to a foe, providing testimony in a plea deal with prosecutors that the President ordered him to make one hush payment and reimbursed him.

He eventually pleaded guilty to felony charges of misuse of campaign funds in the hush payment, tax evasion and lying to Congress.

In five hours of testimony on Wednesday, he compared employment with Mr. Trump to working for a “mobster”.

As per the guilty plea, Mr. Yeo began working with Chinese intelligence officers as early as 2015, initially targeting other Asian countries, but then focusing on the US. Source: thehindu.com Related

The Supreme Court of Pakistan on Thursday allowed a conditional extension of the Army chief’s term for six months, during which Parliament will have to legislate on the terms of service of the top general. On Tuesday, the court had temporarily suspended a government notification granting a three-year extension to Army Chief Qamar Javed Bajwa. […]

Reacting to a report that an additional 90 students had been arrested in the University of Farmington immigration operation in Michigan over the past few months, presidential candidate and Senator Elizabeth Warren said the operation was “cruel” and the students were “entrapped”. “This is cruel and appalling,” Ms. Warren tweeted. “These students simply dreamed of […]