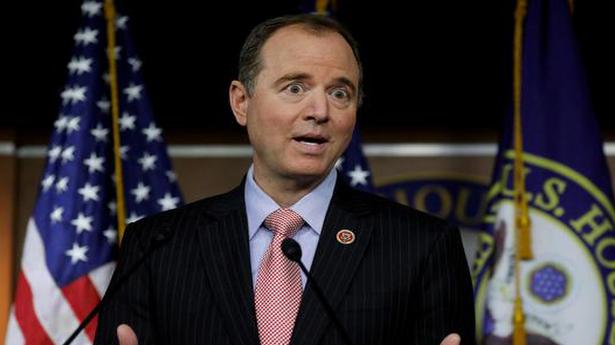 As Democrats and the Director of National Intelligence worked out key arrangements, Mr. Trump’s allies erupted in a surge of second-guessing and conspiracy theorising across the Sunday talk shows, suggesting the White House strategy is unclear against the stiffest challenge to his presidency. One former adviser urged Mr. Trump to confront the crisis at hand and get past his fury over the probe of Russian election interference.

“I honestly believe this president has not gotten his pound of flesh yet from past grievances on the 2016 investigation,” said Tom Bossert, Mr. Trump’s former homeland security adviser. “If he continues to focus on that white whale,” Bossert added, “it’s going to bring him down.”

The Ukraine investigation produced what the Russian probe did not — formal House impeachment proceedings based on the President’s own words and actions.

The White House last week released a rough transcript of Mr. Trump’s July 25 call with Ukranian President Volodymyr Zelenskiy, as well as the whistleblower’s complaint alleging the U.S. President pressured his counterpart to investigate the family of Joe Biden, the former vice president who is seeking the Democratic nomination to challenge Trump’s reelection next year.

In a series of tweets Sunday night, Mr. Trump said he deserved to meet “my accuser” as well as whoever provided the whistleblower with what the President called “largely incorrect” information. He also accused Democrats of “doing great harm to our Country” in an effort to destabilize the nation and the 2020 election.

Mr. Trump has sought to implicate Mr. Biden and his son Hunter Biden in the kind of corruption that has long plagued Ukraine. Hunter Biden served on the board of a Ukrainian gas company at the same time his father was leading the Obama administration’s diplomatic dealings with Kyiv. There has been no evidence of wrongdoing by either of the Bidens.

The House forged ahead, with Mr. Schiff’s committee leading the investigation. Democrats are planning a rapid start to their push for impeachment, with hearings and depositions starting this week. Many Democrats are pushing for a vote on articles of impeachment before the end of the year, mindful of the looming 2020 elections.

Mr. Schiff has said the whistleblower has agreed to testify, but the logistics involving security had yet to be set. Lawyers for the whistleblower expressed concern about that individual’s safety, noting that some have offered a $50,000 “bounty” for the whistleblower’s identity. They said they expect the situation to become even more dangerous for their client and any other whistleblowers, as Congress seeks to investigate this matter.

On a conference call later Sunday, Ms. Pelosi, who was travelling in Texas, urged Democrats to proceed “not with negative attitudes towards him, but a positive attitude towards our responsibility,” according to an aide on the call who requested anonymity to share the private conversation. She also urged the caucus to be “somber” and noted that polling on impeachment has changed “drastically.”

‘Half of Americans approve impeachment’

A one-day NPR/PBS NewsHour/Marist poll conducted last Wednesday found that about half of Americans 49% approve of the House formally starting an impeachment inquiry into Mr. Trump.

There remains a stark partisan divide on the issue, with 88% of Democrats approving and 93% of Republicans disapproving of the inquiry. But the findings suggest some movement in opinions on the issue. Earlier polls conducted throughout Trump’s presidency have consistently found a majority saying he should not be impeached and removed from office.

On the call, Democratic Caucus Chairman Hakeem Jeffries of New York urged the caucus to talk about impeachment by repeating the words “betrayal, abuse of power, national security.” At the same time, Democrats’ campaign arm was mobilising to support the candidates, according to a person on the call who spoke on condition of anonymity to discuss the details.

In contrast, Republicans offered a televised array of strategies to a President who spent the day at his golf club in Virginia and prefers to handle his own communications.

Stephen Miller, the President’s senior policy adviser, called the whole inquiry a “partisan hit job” orchestrated by “a deep state operative” who is also “a saboteur.”

“The president of the United States is the whistleblower,” Mr. Miller said.

“Why would we move forward with impeachment? There’s not something that you have to defend here,” the California Republican said.

Rudy Giuliani, Mr. Trump’s personal lawyer who has been encouraging Ukraine to investigate both Mr. Biden and Hillary Clinton, promoted a debunked conspiracy theory, insisting that Ukraine had spread disinformation during the 2016 election.

“I am deeply frustrated with what he and the legal team is doing and repeating that debunked theory to the president. It sticks in his mind when he hears it over and over again,” said Bossert, who also was an adviser to President George W. Bush. “That conspiracy theory has got to go, they have to stop with that, it cannot continue to be repeated.”

Mr. Giuliani not only repeated it but also brandished what he said were affidavits that support them and claimed that Mr. Trump “was framed by the Democrats.”

Pakistan on Tuesday asked the United Nations Security Council (UNSC) to meet over India’s decision to revoke the special status of Jammu and Kashmir. The move by the Centre blocks the right of the state of Jammu and Kashmir to frame its own laws and allows non-residents to buy property there. Telephone lines, internet and […]

The United Nations Human Rights Council on Thursday approved giving Sri Lanka two more years to set up a credible war crimes investigation into the island nation’s brutal civil war. The UN’s top rights body approved without a vote a resolution to postpone discussing the implementation of an official probe into crimes committed during the […]

Britain secured a Brexit deal with the European Union on Thursday, more than three years after Britons voted to leave the bloc, but Prime Minister Boris Johnson must still win a knife-edge vote in Parliament to get the agreement approved. “Where there is a will there is a deal — we have one!” European Commission […]