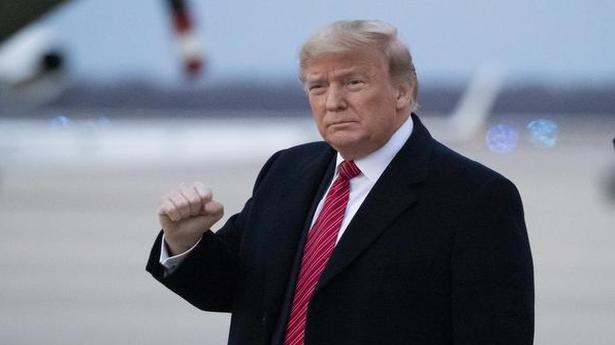 President Donald Trump has called for Russia to end its support for the Syrian regime’s “atrocities” as he expressed U.S. concern over violence in the Idlib region, the White House said on Sunday.

Turkey’s Foreign Minister also pressed his Russian counterpart over the attacks by Damascus on the last rebel-held bastion in the country.

Backed by Russian air power, Syrian President Bashar al-Assad made fresh gains on Sunday as he intensified his assault on the holdout northwestern province of Idlib.

In a call with Turkish President Recep Tayyip Erdogan, Mr. Trump “expressed concern over the violence in Idlib, Syria and… conveyed the United States’ desire to see an end to Russia’s support for the Assad regime’s atrocities”.

Turkey has 12 observation posts in Idlib as part of a 2018 deal reached between Ankara and Moscow to prevent a regime offensive, but Syrian regime forces have pressed ahead regardless. “I stressed that the attacks in Idlib must stop and it was necessary to establish a lasting ceasefire that would not be violated,” Turkish Foreign Minister Mevlut Cavusoglu told journalists at the Munich Security Conference, after he met with Russian Foreign Minister Sergei Lavrov.

Thousands of Hong Kong protesters joined hands to form human chains on Friday in a peaceful protest, with almost three months of anti-government demonstrations showing no sign of let-up. Demonstrators linked hands across different districts as others held up banners thanking overseas nations for supporting “freedom and democracy” in Hong Kong. Their move echoed the […]

Dorian made landfall in Canada on Saturday night south of Halifax with ferocious 155 kph winds and torrential rains, meteorologists said, toppling trees and whipping up debris. The storm churned up 20 meter waves which pounded the coast near the port city that is home to Canada’s Atlantic fleet. As it moved north from the […]

Russians hailed a miracle on Thursday after a passenger plane carrying 233 people made an emergency landing in a corn field on the outskirts of Moscow after striking a flock of birds shortly after take-off. The Ministry of Health said 23 people had suffered injuries, but that nobody had been killed when the Ural Airlines […]