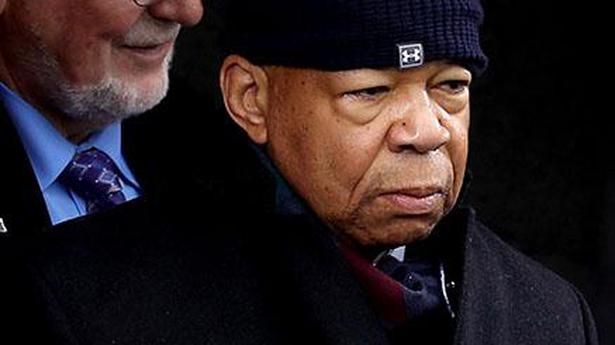 U.S. President Donald Trump defended on Sunday his latest attack on a prominent African-American lawmaker in comments that drew more accusations of racism.

In a series of tweets on Saturday, Mr. Trump took aim at Democratic Representative Elijah Cummings — a high-profile critic of Mr. Trump’s administration whose district covers much of the majority black city of Baltimore, Maryland.

“No human being would want to live there,” he said, in an attack ostensibly provoked by Cummings’ criticism of the harsh conditions facing would-be asylum seekers at the US-Mexico border.

Mr. Trump’s comments triggered a torrent of criticism and he defended them on Sunday in another burst of tweets.

“There is nothing wrong with bringing out the very obvious fact that Congressman Elijah Cummings has done a very poor job for his district and the City of Baltimore,” Mr. Trump said, without adding anything to back up his argument. “Just take a look, the facts speak far louder than words! The Democrats always play the Race Card, when in fact they have done so little for our Nation’s great African American people,” Mr. Trump wrote.

“Now, lowest unemployment in U.S. history, and only getting better. Elijah Cummings has failed badly!”

Saturday’s diatribe ignited a storm of criticism less than two weeks after the House of Representatives condemned Mr. Trump for “racist” comments targeting four first-term Democratic congresswomen who are from ethnic minorities.

The top Democrat in Congress, Nancy Pelosi, on Saturday accused Mr. Trump of a “racist” attack on a “champion… of civil rights and economic justice, a beloved leader in Baltimore, and deeply valued colleague.”

“We all reject racist attacks against him,” wrote Ms. Pelosi — who was born in Baltimore and whose father served as Mayor of the city.

Former Vice-President Joe Biden — the Democratic frontrunner to challenge Mr. Trump in 2020 — called out the President directly on Twitter. “It is despicable for you to attack him and the people of Baltimore this way,” Mr. Biden wrote. “Once again you have proved yourself unfit to hold the office. A President is supposed to lift this nation up. Not tear it down.”

In another tweet on Sunday, Mr. Trump said Pelosi is doing a bad job representing her district in California. “Speaking of failing badly, has anyone seen what is happening to Nancy Pelosi’s district in San Francisco. It is not even recognizable lately. Something must be done before it is too late,” he wrote.

The European Union agreed a three-month flexible Brexit delay on Monday but the British parliament rejected Prime Minister Boris Johnson’s bid to end the political paralysis with a December 12 election. Days before the United Kingdom was formally due to leave the EU on October 31, Brexit hangs in the balance, with British politicians still […]

Iraq’s stability on the line as U.S., Iran tensions soar

Iraq is coming under pressure as the U.S. and Israel increase efforts to contain Iran and its influence in the region. Pro-Iranian militias across Lebanon, Syria and Iraq are being pounded with economic sanctions and precision strikes hitting their bases and infrastructure, putting the governments that host them in the crosshairs of an escalating confrontation. […]

President Donald Trump turned to some legal heavyweights to help defend him in his Senate impeachment trial with the addition on Friday of former independent counsel Ken Starr, who paved the way for former President Bill Clinton’s 1998 impeachment, and prominent lawyer Alan Dershowitz. The team defending the Republican President will be led by White […]