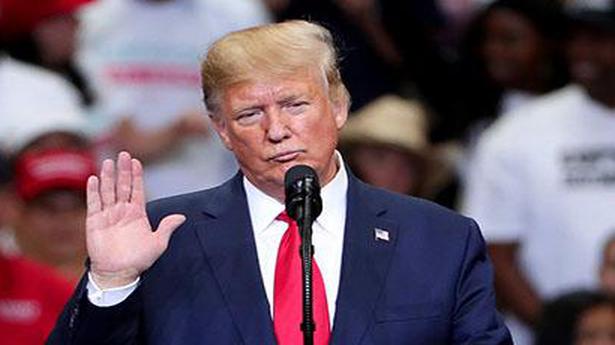 President Donald Trump framed the U.S.-brokered ceasefire deal with Turkey as “a great day for civilisation,” but its effect was largely to mitigate a foreign policy crisis widely seen to be of his own making.

“People have been trying to make this “Deal” for many years. Millions of lives will be saved,” he tweeted.

After hours of negotiation in Ankara, the two nations on Thursday agreed to a five-day ceasefire in the Turks’ deadly attacks on Kurdish fighters in northern Syria, but some fighting continued early on Friday in a northeast Syrian border town.

The Kurds were U.S. allies in the fight against the Islamic State group but came under assault after Mr. Trump ordered U.S. troops to leave the area earlier this month.

The agreement requires the Kurds to vacate a swath of territory in Syria along the Turkish border in an arrangement that largely solidifies Turkey’s position and aims in the week-long conflict.

But he remained silent on whether it amounted to a second abandonment of America’s former Kurdish allies, many of whom are branded as terrorists by Ankara. The deal includes a conditional halt to American economic sanctions and no apparent long-term consequences for Turkey for its actions. Turkish troops and Turkish-backed Syrian fighters launched their offensive against Kurdish forces in northern Syria a week ago, two days after Mr. Trump suddenly announced he was withdrawing the U.S. military from the area. Mr. Trump was widely criticised for turning on the Kurds, who had taken heavy casualties as partners with the U.S. in fighting IS extremists since 2016.

While U.S. officials have insisted that Mr. Trump did not authorise Turkey’s invasion and only that he was not persuasive enough in making the case against it to Mr. Erdogan, the ceasefire codifies nearly all of Turkey’s stated goals in the conflict. Turkish Foreign Minister Mevlut Cavusoglu said the U.S. had accepted the idea of a “safe zone” long pushed by Turkey, and he insisted Turkish armed forces will control the zone. He also made clear that Turkey will not stop at a previously limited zone; he said Turkish control of the Syrian side of the border must extend all the way to the Iraqi border.

Caught in the middle, the commander of Kurdish-led forces in Syria, Mazloum Abdi, told Kurdish TV, “We will do whatever we can for the success of the ceasefire agreement.” But one Kurdish official, Razan Hiddo, declared that Kurdish people would refuse to live under Turkish occupation.

Two people were killed in a shooting in the eastern German city of Halle on Wednesday and police were looking for a suspect, they said on Twitter. “We have a deployment in Halle,” the local police said on Twitter. “According to preliminary findings, people killed. We are conducting urgent searches. Perpetrator on the run. Please […]

A 22-member parliamentary committee has been formed in Pakistan to work on a legislation to prevent the forced conversions and protect the rights of minorities in the conservative Muslim-majority country, according to a media report on Saturday. According to a notification by the Senate Secretariat, dated November 21, Chairman Sadiq Sanjrani formed the committee after […]

Two federal workers, who were on duty on the night financier Jeffrey Epstein killed himself in a New York jail cell, are expected to be charged on Tuesday in connection with their alleged failure to check on him, The New York Times said, citing people with knowledge of the matter. The two Federal Bureau of […]