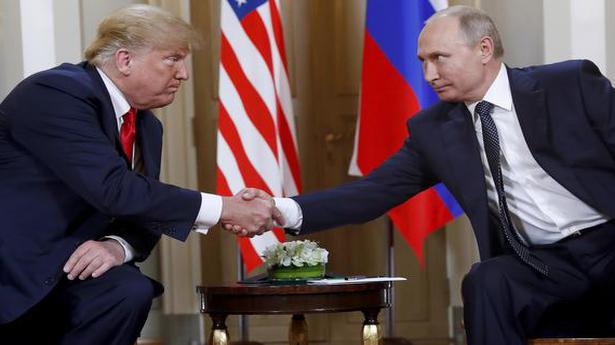 With a smirk and a finger point, President Donald Trump dryly told Russia’s Vladimir Putin “Don’t meddle with the election” in their first meeting since the special counsel concluded that Russia extensively interfered with the 2016 campaign.

The tone of the president’s comment, which came after a reporter asked if he would warn Mr. Putin, was immediately open to interpretation. But it would seem to do little to silence questions about Mr. Trump’s relationship with Russia in the aftermath of special counsel Robert Mueller’s conclusion that he could not establish a criminal conspiracy between Mr. Trump’s campaign and Russia.

It was the latest remarkable moment for Mr. Trump at Mr. Putin’s side after meeting nearly a year ago in Helsinki, considered one of the defining days of Mr. Trump’s presidency, when he pointedly did not admonish Mr. Putin over election interference and did not side with U.S. intelligence agencies over his Russian counterpart.

The leaders traded brief remarks on Friday, the first time they sat together since Helsinki, about issues they planned to discuss when a reporter shouted to Mr. Trump about warning Mr. Putin “not to meddle” in the 2020 election.

The president answered “Of course,” then turned to Mr. Putin and facetiously said, “Don’t meddle in the election.” He playfully repeated the request while pointing at Mr. Putin, who laughed.

Mr. Trump said he enjoyed a “very, very good relationship” with Mr. Putin and said “many positive things are going to come out of the relationship.”

The meeting with Mr. Putin, which came amid a gauntlet of negotiations on international crises, trade wars and a growing global to-do list, was the main event on Mr. Trump’s agenda on Friday at the G20 summit in Osaka. But the president also kept an eye on the race to replace him back home, where 10 Democrats met in Miami as part of the first debates of the 2020 presidential race.

“I just passed a television set on the way here. I saw that health care and maximum health care was given to 100% of the illegal immigrants coming into our country by the Democrats,” Mr. Trump said, telling German Chancellor Angela Merkel during their meeting that a debate the previous night “wasn’t very exciting.”

“So I look forward to spending time with you rather than watching,” he said. Ms. Merkel did not react.

Later, while meeting with Brazil’s president Jair Bolsonaro, Mr. Trump segued from a discussion on the crisis in Venezuela to declare he had heard a rumor that the Democratic Party will change its name to the Socialist Party. “I’m hearing that, but let’s see if they do it,” he said.

There have been no such rumors.

Mr. Trump had said in advance of meeting Mr. Putin that he expected a “very good conversation” but told reporters that “what I say to him is none of your business.” The official White House readout released after the meeting did not mention interference.

Though the meeting occurred in the early morning hours back in the United States, some were quick to denounce the president’s comments. Michael McFaul, who was U.S. Ambassador to Russia under Barack Obama, tweeted that he found Trump’s conduct “depressing.”

“Trump’s admiration and appeasement of Putin is so bizarre,” he wrote. “I can’t think of one concrete U.S. interest that has been advanced by Trump’s behavior.”

White House aides had grown worried that Mr. Trump could use the meeting to once again attack the Russia probe on the world stage, particularly since Mr. Mueller recently agreed to testify before Congress next month, he did not utter the special counsel’s name.

Senate Democratic leader Chuck Schumer had pressed the president to directly challenge the Russian leader on election interference and send a signal “not merely to Putin but to all of our adversaries that interfering with our election is unacceptable, and that they will pay a price a strong price for trying.”

The United States and Russia are also on opposing sides of the escalating crisis with Iran, which shot down an American drone last week. Mr. Trump nixed a possible retaliatory air strike and stressed Friday that the “there’s no rush” to ease the tension with Tehran.

The Mueller report did not establish a criminal conspiracy between Mr. Trump’s associates and the Kremlin to sway the outcome of the election. The finding lifted a cloud over the White House even as tensions have increased between Washington and Moscow. While Mr. Trump has long placed a premium on establishing close personal ties with Mr. Putin, his government has increased sanctions and other pressures on the Russian government.

At a summit last November in Argentina, Mr. Trump canceled what would have been the leaders’ first post-Helsinki meeting after Russia seized two Ukrainian vessels and their crew in the Sea of Azor. Those crew members remain detained, yet he opted to forge ahead with the Osaka meeting.

He said on Friday, alongside Mr. Putin, that the fate of the sailors had yet to be discussed.

The leaders last year announced their withdrawal from a key arms control pact, the 1987 Intermediate-Range Nuclear Forces Treaty. It is set to terminate this summer, raising fears of a new arms race. Another major nuclear agreement, the New Start treaty, is set to expire in 2021 unless Moscow and Washington negotiate an extension.

But the backdrop, as always, will be Russia’s 2016 election interference.

The White House said after Friday’s meeting that the leaders agreed to keep talking about a “21st century model of arms control,” which Mr. Trump said needs to include China. They also discussed the situations in Iran, Syria, Venezuela and Ukraine. The U.S. and Russia are on opposing sides on all four issues.

Mr. Putin has denied meddling in the American election to help Mr. Trump, even though Mr. Mueller uncovered extensive evidence to the contrary. At the news conference that followed the Helsinki summit, Mr. Trump responded to a reporter’s question by declining to denounce Russia’s election interference or side with his own intelligence agencies over Putin.

He opened the G20 summit by meeting with the host, Japanese Prime Minister Shinzo Abe, followed by Indian Prime Minister Narendra Modi and Ms. Merkel. He sounded optimistic about inking trade deals with all three, praised alliances he has strained in the past and expressed hope in dealing with North Korea.

The president, who previously has disrupted carefully choreographed summits by attacking allies and adversaries alike, was poised to attend a dinner Friday evening at the ancient Osaka Castle. He also sent positive signals ahead of Saturday’s talks with China’s Xi Jinping. He said he believed there was “a very good chance” they could make progress toward ending their trade dispute.

Earlier, as Mr. Abe officially received Mr. Trump, the president waved over his daughter Ivanka Trump and son-in-law Jared Kushner, both senior White House aides, to pose with him for the official welcome photo.The two leaders were later joined by Mr. Modi and the three engaged in a group fist bump at Mr. Trump’s urging.

A video of an opera singer performing from her window during a government-imposed curfew in Chile has been going viral on social media lately. The video viewed millions of times around the world. Soprano Ayleen Jovita Romero performed “El Derecho de Vivir en Paz,” or “The Right to Live in Peace,” a song that has […]

The Syrian government on January 3 condemned the killing of top Iranian and Iraqi commanders in a U.S. strike which was hailed by the country’s Opposition. The strike outside Baghdad airport killed top Iranian commander Qasem Soleimani and the deputy chief of Iraq’s pro-Iran paramilitary organisation, Abu Mahdi al-Muhandis. Syria is “certain that this cowardly […]

Fruit in Japan conjures up images of the persimmons and plums of classical East Asian art. But no fruit is dearer, in both senses of the word, in contemporary Japan than the strawberry. From December to May, shop fronts are aglow with this jewel-like fruit that is so much sweeter and more expensive than anywhere […]