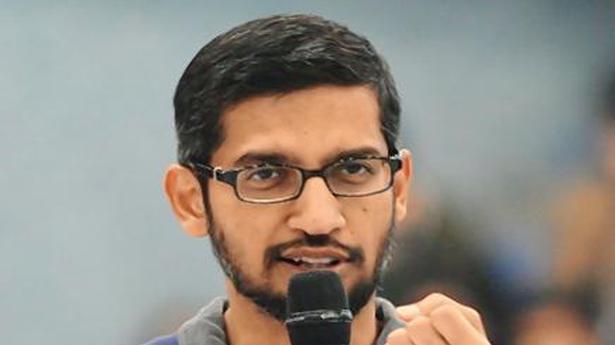 U.S. President Donald Trump has said Google CEO Sunder Pichai assured him that the tech giant is “totally committed” to the U.S. military and not the Chinese Army as the President met him at the White House, days after he accused the California-based company of not supporting American interests.

Mr. Trump earlier this month said, “Google is helping China and their military, but not the U.S.”

On Wednesday, after a meeting with Mr. Pichai at the White House, Mr. Trump said: “Meeting ended very well”. “Just met with @SundarPichai, President of @Google, who is obviously doing quite well,” he said. Mr. Pichai “stated strongly that he is totally committed to the U.S. military and not the Chinese military”, Mr. Trump said. “Also discussed political fairness and various things that @Google can do for our country. Meeting ended very well!” he said.

Mr. Trump’s tweet criticising Google came after acting Defence Secretary Patrick Shanahan and General Joseph Dunford, Chairman of Joint Chiefs of Staff, said during a congressional hearing that “Google was partnering with China… but the Internet search engine giant has shown a lack of willingness to work with the U.S. Department of Defense”.

The U.S. Senate on Thursday passed an $8.3 billion bill to combat the outbreak of COVID-19, a day after the House of Representatives overwhelmingly approved it. The bill will now go to President Donald Trump for his signature. More than $3 billion of the approved funds would be devoted to research and development of coronavirus […]

CTBTO invites India to be an observer at meetings

The executive secretary of the Comprehensive Test Ban Treaty Organization (CTBTO), Lassina Zerbo, has invited India to be an observer in the CTBT. “I’m not asking India to ratify [the treaty] — I know that is not possible now — but I think giving India the opportunity to join as an observer could be a […]

Seoul shuts down more than 2,100 nightclubs

South Korea’s Centers for Disease Control and Prevention, or KCDC, said earlier in the day that 18 new cases were reported in the 24 hours to midnight Friday Source: thehindu.com Related