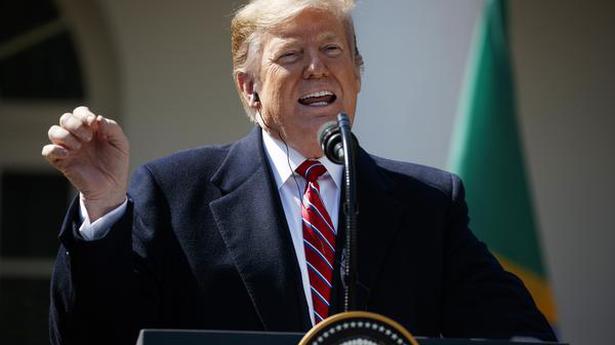 US President Donald Trump touted prospects for an “epic” trade deal with China but acknowledged that a settlement of a year—long commercial conflict remained at least a month away.

Speaking at an Oval Office meeting with visiting Chinese Vice Premier Liu He on Thursday, Mr. Trump said a trade agreement between the two countries could come “within the next four weeks”, followed by an additional two weeks to polish the text, reports The Washington Post.

The President billed the hoped—for deal as “monumental” and “the grand—daddy of them all”.

But Mr. Trump said it was too soon to set a date for a signing summit with Chinese President Xi Jinping with negotiators still haggling over core questions, such as a proposed enforcement mechanism and the future of each side’s import tariffs.

“We have a ways to go,” Mr. Trump told the media, adding: “We are rounding the turn.”

Mr. Trump said that any summit would be “here”, but he did not specify whether he meant Washington or elsewhere in the US.

Mr. Xi also sounded an upbeat note, conveying to Mr. Trump through Liu that he wanted an early conclusion to the negotiations on the text of a bilateral trade deal.

The two sides had reached a “new consensus” on the text of a deal during the latest round of talks in Washington this week, Liu said.

Mr. Trump’s upbeat remarks came on the second of three days of talks this week between US and Chinese negotiators.

It remains unclear whether the US will cancel some or all of the tariffs Mr. Trump had imposed last year on more than $250 billion worth of Chinese imports after concluding that Beijing was forcing American companies to surrender proprietary technology in return for being allowed to do business in the Asian country, The Washington Post said.

The President has spoken of keeping at least some tariffs in place as leverage to encourage the Chinese government to comply with an eventual agreement.

China is pushing for the tariffs to be removed before it will agree to lift its retaliatory tariffs on US farm products and industrial goods including autos.

Also unclear is whether China will agree to the Trump administration’s demand for an enforcement mechanism allowing the US to reimpose tariffs if it believes Beijing is not fulfilling its obligations.

Plane with 8 people crashes into resort area in Philippines

A small plane carrying eight people crashed into a resort area south of the Philippine capital and exploded in flames on Sunday, and at least one body was recovered from the wreckage, officials said. The light plane crashed into a resort compound in Pansol village in Laguna province near the foothills of Mount Makiling and […]

Thailand reported 188 new coronavirus infections on Sunday, its largest daily increase, taking the total to 599 cases, a senior health official said. The majority of the new infections are connected to a previous cluster of cases from a boxing stadium, Taweesin Wisanuyothin, a Public Health Ministry spokesman, told a news conference adding one patient […]