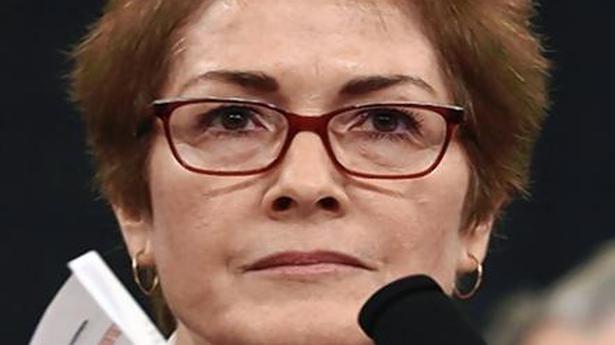 Donald Trump demanded the dismissal of Marie Yovanovitch, the Ambassador to Ukraine and a key figure in the President’s impeachment trial, according to a video recording released to U.S. media on Saturday.

The footage was reportedly taken during an April 2018 donor dinner at a hotel and released to news outlets by an attorney for Lev Parnas, an indicted associate of Mr. Trump’s personal attorney Rudy Giuliani.

Mr. Parnas and his business partner Igor Fruman are key players in Mr. Trump’s alleged campaign to pressure the government of Ukraine to dig up dirt on Joe Biden, a potential election opponent for the President.

The issue is central to Mr. Trump’s ongoing impeachment trial in the U.S. Senate.

His order to fire the Ambassador came after Mr. Parnas told him that Ms. Yovanovich was an impediment, and claiming that she had privately disparaged the President. “Get rid of her!” Mr. Trump says on the tape, reportedly addressing a White House aide at the dining table. “Get her out tomorrow. I don’t care. Get her out tomorrow. Take her out. OK? Do it.”

Images taken at an awkward angle appear at the start of the one hour, 23-minute long video. The rest of the recording shows a tan background, as if the camera were covered, but Mr. Trump’s distinctive voice is clear.

In TV interview with MSNBC News last week, Mr. Parnas said Mr. Trump “knew exactly what was going on” with his and Mr. Fruman’s efforts to pressure Ukrainian authorities to investigate Mr. Biden.

Both Mr. Parnas and Mr. Fruman were charged with violating U.S. campaign finance laws in October.

The documents also showed the pair, working with Ukrainian officials, trying to force out Ms. Yovanovitch, who Mr. Trump eventually removed in May 2019.

Saturday’s recording corroborates much of what Mr. Parnas said in his TV interview, including that he knew Mr. Trump — something the President has denied.

In October, Ms. Yovanovitch testified to Congress that she was recalled due to “unfounded and false claims by people with clearly questionable motives.”

Joseph Bondy, an attorney for Mr. Parnas, said that he submitted the evidence to investigators in the Democratic-controlled House of Representatives.

He also told CNN that Mr. Parnas has more recordings and photographs that may be released to the public.

The release of the tape increases pressure on U.S. senators to subpoena witnesses for the impeachment trial, a move several polls show has strong support among the US public.

They have argued that the president did nothing wrong in his dealings with Ukraine and that US voters—not Congress—should decide his fate.

Mr. Trump’s lawyers will resume his defense on Monday.

A decision on whether Pakistan-based Jaish-e-Mohammed chief Masood Azhar will be listed as a global terrorist by the United Nations will be known on May 1 as the world body’s Sanctions Committee holds a crucial meeting, amid indications that China could lift its hold on the proposal to blacklist Azhar. The Council’s 1267 Al Qaeda […]

No country for migrant workers

Remittances to developing nations are set to fall as migrant workers are hit hard by the virus crisis Source: thehindu.com Related