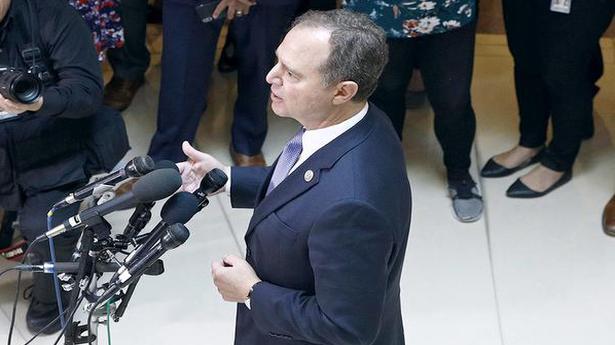 U.S. President Donald Trump on Friday vigorously rejected a whistleblower’s claim of wrongdoing, amid reports that he used a call with Ukraine’s President to pressure him to investigate the son of Mr. Trump’s Democratic rival Joe Biden.

The whistleblower’s secret complaint has triggered a tense showdown between Congress, whose Democratic leaders are demanding to review the complaint, and the executive branch, which has barred them from doing so. It has also raised concerns that Mr. Trump sought to strong-arm Ukraine into providing damaging information on the President’s possible 2020 challenger, which would represent dangerous foreign meddling in the U.S. election.

The Washington Post, citing two unnamed former U.S. officials, said the complaint stemmed from Mr. Trump’s communications with Ukraine, and a “promise” allegedly made by the President.

Mr. Trump slammed the “ridiculous” story, attacking the “partisan whistleblower,” despite admitting to not knowing the person’s identity. He insisted he had a “totally appropriate” conversation, without detailing with whom, or what was said, and instead suggested that Mr. Biden and his son should be investigated for their actions in Ukraine. Mr. Biden responded forcefully, demanding that Mr. Trump immediately release the transcript of the call and saying the reports Mr. Trump sought to coerce his Ukrainian counterpart, if true, amounted to “clear-cut corruption.”

Suspicions have focused on a July 25 call between Mr. Trump and Ukraine’s President Volodymyr Zelensky. Mr. Trump’s Democratic opponents have been probing that call in connection with allegations Mr. Trump and his personal lawyer Rudy Giuliani tried to pressure the Ukrainian administration.

The Wall Street Journal reported that Mr. Trump pressed Mr. Zelensky about eight times on the call to investigate possible corruption involving Mr. Biden’s son Hunter, who worked with a Ukrainian natural gas company. When asked by reporters whether he discussed the Bidens with Mr. Zelensky, Mr. Trump said curtly: “It doesn’t matter what I discuss.” But he did not deny having done so.

Instead he urged media to “look into” Mr. Biden’s involvement in Ukraine, and his comments in early 2016 in which the former U.S. Vice-President said the Barack Obama administration would freeze $1 billion in U.S. loan guarantees unless Kiev fired its top prosecutor.

Amid the swirling allegations, Mr. Giuliani told CNN on Thursday that “of course I did” ask Ukraine to investigate Mr. Biden. Mr. Giuliani said he did not know whether Mr. Trump brought up Mr. Biden, but said he would have “every right” to do so.

Adding yet another layer to the controversy, congressional policymakers were concerned the Trump administration had been holding back military aid to Ukraine at the time. The aid was finally released last week.

Democratic lawmakers say a President conditioning foreign aid on providing dirt on a U.S. election rival would amount to grounds for impeachment.

Presidential candidate Elizabeth Warren called for Mr. Trump’s impeachment, and in a series of tweets criticised Congress for its repeated failure to start the process.

The Saudi-led coalition fighting in Yemen staged multiple airstrikes on a detention center operated by the Houthi rebels in the southwestern province of Dhamar, killing at least 100 people and wounding dozens more Sunday, officials and the rebels’ health ministry said. Franz Rauchenstein, the head of the Red Cross delegation in Yemen, suggested that the […]

Russia on Thursday launched an unmanned rocket carrying a life-size humanoid robot that will spend 10 days learning to assist astronauts on the International Space Station. Named Fedor, short for Final Experimental Demonstration Object Research, the robot is the first ever sent up by Russia. Fedor blasted off in a Soyuz MS-14 spacecraft at 6:38 […]

North Korea fired several short-range projectiles from its east coast on Saturday, South Korea’s military said, as analysts said the country is stepping up pressure against the United States after February’s failed nuclear summit in Hanoi. The South Korean military initially described it as a missile launch, but subsequently gave a more vague description. If […]