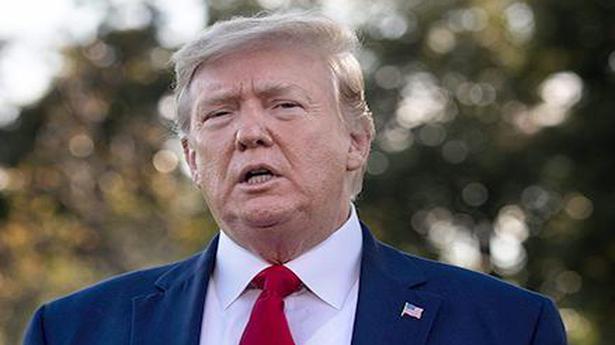 U.S. President Donald Trump on Monday demanded Turkey stop its military incursion in Syria and imposed new sanctions on the NATO ally as Trump scrambled to limit the damage from his much-criticised decision to clear U.S. troops from Turkey’s path.

Vice-President Mike Pence said Mr. Trump had told Turkish President Tayyip Erdogan in a phone call on Monday to agree to an immediate ceasefire. He also said he would travel to the region soon to try to mediate the crisis.

Mr. Pence said Mr. Trump had been firm with Mr. Erdogan on the phone.

“The United States of America simply is not going to tolerate Turkey’s invasion in Syria any further. We are calling on Turkey to stand down, end the violence and come to the negotiating table,” Mr. Pence told reporters.

Turkey launched a cross-border operation into northern Syria on Wednesday just days after Mr. Erdogan told Mr. Trump in a phone call that he planned to move ahead with a long-planned move against America’s Kurdish allies in the region.

Mr. Trump abruptly announced a redeployment of 50 American troops from the conflict zone to get them out of harm’s way, dismissing criticism that this would leave the Kurds open to attack. This was widely seen as giving Erdogan a green light for his operation.

With lawmakers in the U.S. Congress moving to impose sanctions of their own, Mr. Trump issued an executive order authorising sanctions against current and former officials of the Turkish government for contributing to Turkey’s military operation in northern Syria.

In a statement, Mr. Trump said he had increased tariffs on imports of Turkish steel back up to 50%, six months after they were reduced, and would immediately stop negotiations on what he called a $100 billion trade deal with Turkey.

“Unfortunately, Turkey does not appear to be mitigating the humanitarian effects of its invasion,” said Mr. Trump.

Treasury Secretary Steven Mnuchin said the United States had imposed sanctions on Turkey’s Ministers of Defence, Interior and Energy, as well as their departments.

The scenes of carnage from Turkey’s assault have exposed Mr. Trump to harsh criticism from Republicans and Democrats alike for abandoning the Kurdish allies who were instrumental in the U.S. battle against Islamic State militants in Syria.

As Congress has vowed to act if he will not, Mr. Trump said Turkey’s action is precipitating a humanitarian crisis and “setting conditions for possible war crimes” but he made clear he had no plans to reverse his decision to withdraw.

“As I have said, I am withdrawing the remaining United States service members from northeast Syria,” said Trump.

U.S. troops coming out of Syria will stay in the region to monitor IS and a small footprint will remain at the Tanf base in southern Syria, he said.

Senate Majority Leader Mitch McConnell, a Kentucky Republican allied with Mr. Trump, expressed his displeasure with the President’s decision in a statement.

“Abandoning this fight now and withdrawing U.S. forces from Syria would recreate the very conditions that we have worked hard to destroy and invite the resurgence of ISIS,” he said.

A statement from Senate Democratic leader Chuck Schumer and Democratic Senators Robert Menendez and Jack Reed said the only person who is able to “immediately stop this tragedy unfolding is the President himself.”

“The first step when Congress returns to session this week is for Republicans to join with us in passing a resolution making clear that both parties are demanding the President’s decision be reversed,” they said.

Mr. Trump said his executive order would enable the United States to impose sanctions on those current or former Turkish officials who may be involved in human rights abuses. He said it will authorise sanctions such as blocking of property and barring entry into the United States.

Bigotry mars return of Italy hostage who converted to Islam

The American India Foundation (AIF) said it has tied up with the World Central Kitchen (WCK) for organising the meals. Source: thehindu.com Related