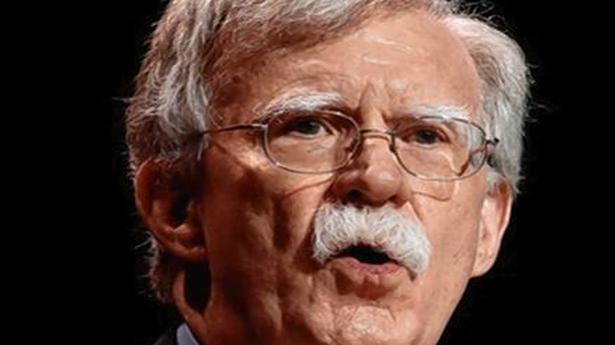 As reports of U.S. President Donald Trump having told his former National Security Adviser John Bolton to hold assistance to Ukraine pending politically-charged investigations spread, pressure from within the GOP to call new witnesses intensified, with some GOP Senators publicly expressing their interest in hearing from Mr. Bolton and other new witnesses.

Mr. Trump’s defence team, however, side-stepped the Bolton issue as they defended their client in the Senate on Monday.

In a book manuscript, some details of which were reported by The New York Times on Sunday, Mr. Bolton had said that Mr. Trump asked him to continue freezing $391 in military aid to Ukraine pending Ukraine announcing investigations that were politically advantageous to Mr. Trump.

Mr. Trump was impeached by the House of Representatives in December on charges of abuse of power and obstruction of Congress. A Democrat run impeachment inquiry had found that Mr Trump conditioned the aid to Ukraine and a crucial White House meeting with his Ukrainian counterpart, Volodymyr Zelenksy, on the Ukrainians announcing investigations into former Vice President Joseph Biden, the Democrat frontrunner for the White House and his son, Hunter, who was on the board of Ukrainian energy company Burisma. Mr Trump had also, as per the inquiry’s findings, asked for a second investigation into an unfounded theory that Ukraine meddled in the 2016 U.S. elections.

“I think it’s increasingly likely that other Republicans will join those of us who think we should hear from John Bolton,” GOP Senator from Utah and former Presidential candidate Mitt Romney told reporters on Monday.

During lunch, GOP Senators had discussed at greater length the need to call Mr. Bolton and other witnesses, as per some media outlets.

“The reports about John Bolton’s book strengthen the case for witnesses and have prompted a number of conversations among my colleagues,” GOP Senator Susan Collins of Maine tweeted.

Along with Ms Collins and Mr Romney, Lisa Murkowski of Alaska and Lamar Alexander of Tennessee are likely GOP senators who will want to hear from new witnesses.

Mr Trump’s defence team argued on Monday that Mr Trump had told others involved with the matter that there was no linkage between the aid to Ukraine and the announcement of an investigation. Mr. Trump’s lawyers Pam Bondi and Eric Herschmann also turned the focus on the Bidens calling into question the Bidens’ dealings in Ukraine. They argued that former U.S. President Barack Obama had abused his office by engaging in a quid pro quo with Dmitriy Medvedev, who was President of Russia at the time.

The prime-time (evening) slot as saved for high profile Harvard law professor and criminal defence attorney Alan Dershowitz, who argued that the president must have committed an actual crime for his impeachment to meet constitutionally mandated standards. Critics of this argument, such as Harvard Law Professor Nikolas Bowie argued in the New York Times on Monday that even if one agrees with Mr Dershowitz, the president has been accused of two crimes – abuse of office and obstruction of Congress.

If Mr Bolton and additional witnesses are called , the trial could extend longer than Mr Trump’s GOP allies in the Senate had initially hoped.

A blast at one of Pakistan’s oldest and most popular Sufi shrines killed at least four people and wounded 24 in the eastern city of Lahore on Wednesday, police said, as the country marks the fasting month of Ramadan. Police have said they are still investigating the nature of the blast, which occurred near the […]

Australian sentenced to death in China for drug trafficking

This could inflame tensions with China. Source: thehindu.com Related

The WHO has been sharply criticised for the length of time it took to declare an international emergency. Source: thehindu.com Related