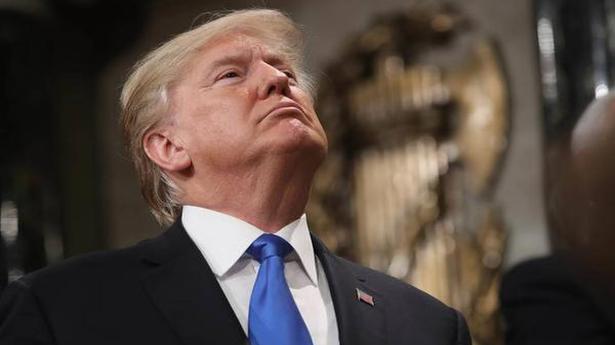 President Donald Trump’s turnabout on whether the special counsel should appear before Congress — “Bob Mueller should not testify,” he tweeted — has sparked criticism from Democratic lawmakers eager to question the author of the report on Russia’s election interference.

Not only did Mr. Trump in tweets on Sunday contend that Mueller’s report didn’t reveal collusion and that there was no obstruction, he asserted: “Bob Mueller should not testify.

No redos for the Dems!” Tensions between the White House and House Democrats have been fueled by disputes over calling administration officials before multiple committees, among them former White House counsel Don McGahn, and obtaining an unredacted copy of the special counsel’s report and its underlying evidence as well as information relating to Trump’s personal and business finances.

“Then he refused to be interviewed by Mueller. Now he’s trying to silence Mueller. For a man who constantly proclaims his innocence, @realDonaldTrump is acting awfully guilty. Mueller must testify publicly before Congress.” “Today, Trump announced he is opposed to Mueller testifying before Congress. Before the American people,” tweeted Rep. Adam Schiff, the California Democrat who chairs the House Intelligence Committee.

Mr. Trump’s repeated statements on collusion and obstruction differ from the report’s. On collusion, Mueller said he did not assess whether that occurred because it is not a legal term. He looked into a potential criminal conspiracy between Russia and the Trump campaign and said the investigation did not collect sufficient evidence to establish criminal charges on that front.

Mr. Mueller didn’t charge Mr. Trump with obstruction but wrote that he couldn’t exonerate him, either.

In his tweets Sunday, Mr. Trump did not indicate if he would take any steps to block Mr. Mueller, who is a Justice Department employee. The president tweeted after a Democrat on the House Judiciary Committee said he was hopeful Mr. Mueller would testify, noting that May 15 has been proposed.

“We hope the special counsel will appear” at that time, Rhode Island Rep. David Cicilline told “Fox News Sunday” and added that “we think the American people have a right to hear directly from him.” Cicilline later tweeted that “nothing has been agreed to yet.”

The House Judiciary Committee chairman, Democratic Rep. Jerrold Nadler of New York, said last week the committee was “firming up the date” for Mueller’s testimony and hoping it would be May 15.

Mr. Cicilline said on Fox that “obviously until the date comes, we never have an absolute guarantee” and in his tweet later, said that “we hope the Special Counsel” will agree to the proposed date for his testimony.

Representatives of the Justice Department and Mr. Mueller declined to comment on Mr. Cicilline’s remarks and on Mr. Trump’s tweet.

The County Oak Medical Centre has been temporarily closed down, the BBC said. It did not cite sources. Last week, health officials said a case of coronavirus had been identified in Brighton and they were working to prevent any further spread. A message left at the medical centre’s phone says: “Unfortunately, the building has had […]

As New Zealand lawmakers vigorously debated fuel prices in parliament this week, speaker Trevor Mallard called for order while feeding baby Ttnekai his bottle. The six-week-old son of Labour MP Tmati Coffey and his husband, born via a surrogate mother last month, was being cuddled by his father in the debating chamber on Wednesday when […]

COVID-19 | In Italy and beyond, virus outbreak reshapes work and play

Italy closed all schools and universities and barred fans from all sporting events for the next few weeks, as governments trying to curb the spread of the coronavirus around the world resorted to increasingly sweeping measures that transformed the way people work, shop, pray and amuse themselves. With the virus present in more than 80 […]