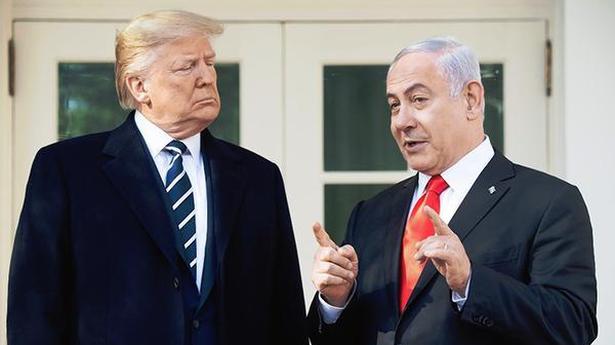 U.S. President Donald Trump on Tuesday proposed creation of a Palestinian state with capital in eastern Jerusalem, dependent on Palestinians taking steps to become self-governing, as part of a peace plan to end decades of conflict in the region.

In exchange, Israel would agree to accept a four-year freeze on new settlement activity while Palestinian statehood is negotiated.

“Today, Israel has taken a giant step toward peace,” Mr. Trump said as he announced the plan at the White House with Israeli Prime Minister Benjamin Netanyahu at his side, saying he also sent a letter about it to Palestinian President Mahmoud Abbas.

“This is a historic day,” Mr. Netanyahu said, comparing Mr. Trump’s peace plan to former President Harry Truman’s 1948 recognition of the state of Israel. “On this day, you became the first world leader to recognise Israel’s sovereignty over areas in Judea and Samaria that are vital to our security and central to our heritage,” he added, using the Biblical names for the West Bank.

The absence of the Palestinians from Mr. Trump’s announcement is likely to fuel criticism that the plan tilts toward Israel.

U.S. officials said they were braced for initial Palestinian skepticism but hoped that over time they will agree to negotiate.

Mr. Trump has endorsed a proposed map outlining the two states, the officials said. The Palestinian state would be double the size of land that Palestinians currently control and would be connected by roads, bridges and tunnels, the official said.

Meanwhile, thousands of Palestinians demonstrated in Gaza and Israeli troops reinforced positions near a flashpoint site between the Palestinian city of Ramallah and the Jewish settlement of Beit El in the West Bank.

A Netanyahu spokesman said the Israeli leader would fly to Moscow on Wednesday to brief Russian President Vladimir Putin on the proposals. Palestinian leaders had said they were not invited to Washington, and that no plan could work without them.

On Monday Palestinian leader Mahmoud Abbas said he would not agree to any deal that did not secure a two-state solution. That formula, the basis for many years of frustrated international peace efforts, envisages Israel co-existing with a Palestinian state.

Palestinians have refused to deal with the Trump administration in protest at such pro-Israeli policies as its moving the U.S. Embassy in Israel from Tel Aviv to Jerusalem, whose eastern half the Palestinians seek for a future capital.

The Trump administration in November reversed decades of U.S. policy when Secretary of State Mike Pompeo said Washington no longer regarded the settlements on West Bank land as a breach of international law. Palestinians and most countries view the settlements as illegal, which Israel disputes.

Both Trump and Netanyahu face political challenges at home. Trump was impeached in the House of Representatives last month and is on trial in the Senate on abuse of power charges. On Tuesday Netanyahu was formally indicted in court on corruption charges, after he withdrew his bid for parliamentary immunity from prosecution.

Deaths from China’s new flu-like virus rose to 17 on January 22, heightening global fears of contagion from an infection suspected to have come from animals. The previously unknown and contagious coronavirus strain emerged from the central city of Wuhan, with cases now detected as far away as the United States. Officials believe the origin […]

Coronavirus pandemic inevitable, US warns as disease spreads across globe

Asia reported hundreds of new coronavirus cases on Wednesday, including the first U.S. soldier to be infected, as the United States warned of an inevitable pandemic, and outbreaks in Italy and Iran spread to more countries. World stocks tumbled for the fifth day while safe-haven gold rose back towards seven-year highs and U.S. bond yields […]